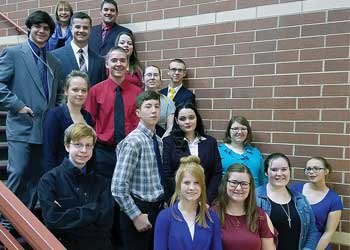 Fifteen members of the Lovell High School Speech and Debate team traveled to Thermopolis for their first and only meet of the season that included a novice division, taking third place in the 3A division.

The team has been consistently growing each year, with a leap from 11 members last year to 18 this year. Many have joined the team this year after being referred by already active members, including friends and a few siblings. The team has a combination agreement with Rocky Mountain High School allowing Lovell and Rocky students to combine their efforts and compete on the same team.

Returning are some familiar faces who have taken leadership roles this year and several are completely new to the program. Coach Deb Fink said she is seeing a definite interest in the debate side this year.

At the Thermopolis meet, held on Dec. 9, seasoned participant Alecx Christensen took first place in the Lincoln-Douglas debate and second place in Congress. Christensen has been competing in all four years of high school and was state champion last year.

Kalley Collins and her teammate Justin Dausman tied for first place in the Public Forum event, along with Genavive Mader and her teammate JR Dickson. Fink said this is the first time she has had students show an interest in this event. The students were asked to debate whether college athletes should be paid according to the Fair Labor Standards Act.

“I was kind of shocked to make it into finals,” said Watts. “I wasn’t expecting that my first meet.”

Watts was encouraged to join the team by her friend and fellow Rocky Mountain High School classmate Christensen.

For her drama, she performed a monologue from the standpoint of a woman who brought her mother from Mexico to the United States, only to learn her mother was suffering from Alzheimer’s disease.

“I was really afraid of public speaking before,” said Watts. “I’m good at one-on-one but not so good in front of a group. I wanted to learn more about public speaking to get over that. I didn’t know what to expect at first, but I’m already feeling more confident.”

She said that confidence is already extending into school and other activities.

Fink noted the team took first and second in the Public Forum event. She said it was the first time the team had achieved that. Next up, the students will compete in one of the largest and most competitive meets of the season at Northwest College, Jan. 5-6.

The team will be hosting a fireman’s rib fundraising dinner on Jan. 16 at the Fire Hall in Lovell. Tickets are $15 apiece and available through any team member. The proceeds will be used to help cover travel expenses, which were greatly reduced in the most recent school budget cuts.