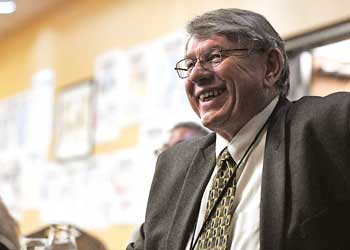 A lifetime of service to Wyoming and Wyoming journalism was honored Friday night in Casper.

Schmidt was introduced Friday at the Ramkota Hotel by longtime friend and former Buffalo Bulletin publisher Jim Hicks, who recounted stories from Schmidt’s long and successful career as a journalist and newspaper publisher.

Born in Lovell in 1944 to William and Margaret Schmidt, Schmidt graduated from Greybull High School in 1962, excelling for the Buffaloes football team. He went on to play college football at Trinidad, Colo., State Junior College, graduating in 1964.

Schmidt served in the U.S. Army from 1965-67, the final 15 months in Vietnam, then returned to college and graduated from the University of Wyoming in 1970. He was hired by the Riverton Ranger daily newspaper and worked as a reporter, photographer, ad salesman and sports editor for five years, also serving as acting publisher of the Powell Tribune for 10 months in 1974-75 while publisher Dave Bonner attended a one-year fellowship at Stanford University.

Bonner told Hicks that, not only did Schmidt fill his shoes as publisher, he improved the bottom line, saying, “I couldn’t believe the P&Ls Pat was sending me in California. He’s a big guy with an even bigger heart.”

Having married a Lovell girl, Emily Walker, daughter of Larry and Verna Walker, Schmidt joined the Lovell Chronicle as publisher in 1975, taking over when Ron Lytle moved to Hardin, Mont. He published the Chronicle until June of 1984, when he moved on to the Thermopolis Independent Record as publisher.

Hicks noted that Schmidt mentored many a young reporter, including Bruce Moats, as he tackled the very difficult and emotional initial coverage of the Dr. John Story case.

“Pat encouraged that reporter to seek the truth and help keep the Chronicle true to the real principles of honest and objective journalism,” Hicks said, adding, “Over the years, he has coached and encouraged many young reporters and advertising executives and explained the business side, as well.”

Many newspaper people in Wyoming have sought Schmidt’s advice over the years, Hicks said, including his own son, Robb, the current publisher of the Bulletin and other papers.

“I know my son, Robb, always made it a habit of seeking Pat’s advice and opinion when faced with difficult situations. He would ask my advice, then call Pat to see what he should really be doing,” Hicks joked. “Pat’s advice always prevailed.”

He also noted that Schmidt served as president of the Wyoming Press Association during a period when the association was rapidly growing and improving service to its members, pushing hard to change the WPA into a vehicle for education and the exchange of ideas rather than a largely social organization.

In Thermopolis, Schmidt became the Independent Record’s longest serving editor and publisher from 1984 to 2010, and the IR was several times judged the best small weekly newspaper in Wyoming. He also served the State of Wyoming as a member of the Wyoming Business Council, and served various organizations in Lovell and Thermopolis.

Hicks quoted WPA Executive Director Jim Angell in saying, “Pat has never lost his joy or passion for newspapering and has passed it on to all of the young reporters and newspaper people out there. He became the embodiment of doing the right thing even though it was difficult.

“His tenures in Riverton, Powell, Lovell and Thermopolis were marked by many state and national awards for those papers as he inspired those around him to pursue excellence.”

In accepting the award, Schmidt thanked many people including the “great education system” in Greybull, and the “great example of community journalism” provided by longtime Greybull Standard publisher Bruce Kennedy, himself a member of the hall of fame, and his family, wife Betty, and children Bob, Brian and Ann Kennedy Turner.

All told, Schmidt spent 40 years as a Wyoming newspaperman.