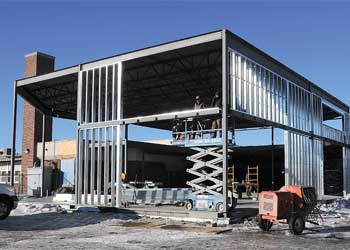 A noticeable hump in the kitchen/cafeteria floor at Lovell Elementary necessitated the need to build an entirely new addition to the school to house a new kitchen and cafeteria area. The central kitchen is used to cook and supply food to the entire school district. Concern for staff and student safety made the district’s superintendent Rick Woodford seek an emergency loan from the State School Facilities Department.

“The first thing we noticed that was pretty severe was a hump or mound inside the cafeteria,” explained Woodford. “You can’t miss it. It feels like you walk up a ramp and then down a ramp. It’s an upheaval that extends all the way from the kitchen to the cafeteria and goes under two posts that hold the structure up. As the floor moves upward it puts pressure on the trusses and has caused one of the walls to bow out.”

Woodford speculated that it could be the type of soils or even water under the building causing the foundation to buckle.

“It’s hard to really know what’s going on under there,” said Woodford. “Once we demolish the building we’ll be curious to see what is causing it.”

The district’s request for emergency funding was approved by the State Facilities Department. The funds are being used to build a completely new addition on the southeast side of the building that will house a brand new kitchen and cafeteria.

In the meantime, Synergy Construction was contracted to install emergency braces in the existing cafeteria/kitchen area, making it safe to use the building while the new addition is under construction. Synergy is also the contractor building the new structure.

“It’s safe to be in there right now, but we don’t know what the future will hold,” said Woodford. “At one time we talked about building a new school or remodeling the school, but for now, we are doing this in the interest of safety. Funds really aren’t available to do more.”

The old cafeteria was originally built in the mid-1940s. The school has had many additions over the years.

Woodford explained that once the new addition is built, the old structure will be demolished and the exterior of the building will be repaired to match what’s already there.

He noted that though the new facility is roughly the same square footage as the old cafeteria and storage facility, it is more efficient in its design. He said an area adjacent to the old kitchen/cafeteria will still be used for storage, essentially increasing the amount of space available to the kitchen staff.

“Since the space is reconfigured differently, it will seem like a lot more space,” said Woodford. “We had a lot of storage space adjacent to that old kitchen, and some of it will not be torn down. Because of that, we actually gain some square footage in the process.”

The design will incorporate some of the old layout with improvements. Kitchen staff participated in planning the new structure.

“The old cafeteria served us really well and the cooks liked the layout,” said Woodford. “The new space will be similar. We made some changes, but we tried
to keep the good from the old design and to incorporate some design elements.”

One big difference is that the kitchen will have more cold storage than the old structure. The traffic flow will also be different. Woodford expressed that the new design will “have fewer people bumping into each other.” Students will enter the kitchen area to get their meals. A divider in the food service line will direct them out another door after they’ve picked up their meal.

“What’s nice about this design is we can close off the kitchen and use the room as a multi-purpose room when needed,” said Woodford.

Woodford said he anticipates the room will be used for community events, assemblies and for staff development meetings.

The project hit a snag a few months ago when the construction crew ran into some old foundation concrete during their excavation. The concrete had to be demolished, excavated and removed before the crew could proceed. The project’s primary contractor, Synergy Construction, sub-contracted Midway Construction for the project. The cost to remove the old foundation was about $50,000, which Woodford thought was very reasonable considering the amount of work that needed to be done.

The project began in September. The main crew lost two full weeks of construction time due to the additional excavation work to remove the old foundation. The project was also set back by another few weeks due to a delay in the receipt of posts needed for the project. Woodford noted that relatively good weather during the months of November and December allowed the crews to continue working. Fortunately, the metal structure allowed the crew to continue working even in inclement weather, he said.

“We were able to get quite a bit done in the fall, but I would say we’re still on track to finish before school begins next year,” said Woodford.

Woodford said he estimates the building will be complete and ready to use around Aug. 1. He said the goal is to have the construction complete in June, so equipment from the old kitchen/cafeteria can be moved during the summer months, while school is not in session. Once the new structure is complete, demolition of the old structure will begin.

Woodford said “Phase 3” of the project will begin once the addition is complete. The phase will include some exterior re-facing where the old cafeteria connects to the school. The canopy in front of the school will also come down and a new entry will be created. Woodford said the canopy will be smaller and will tie in with the new addition. There will also be some work done on the sidewalk in front of the school, as well as work on landscaping and planters. Due to this extra work, the school buses will continue to run on Kansas for another year.

“I think it’s going to take the rest of this school year and into next year before it’s really done,” said Woodford. “People have been really great about the whole project from our bus drivers to our staff and our parents. The kids have been good. I think they’ve actually enjoyed watching the construction take place from the playground. Everyone affected has been very patient and we really appreciate that.”

Woodford said it’s been a plus to work with local contractors.