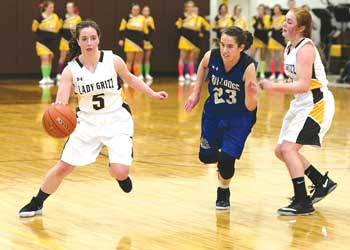 Back-to-back three-pointers by Teagan Townsend and Brenda Timmons broke an early 8-8 tie and the Rocky Mountain Lady Grizzlies never gave up the lead as they beat the Lovell Lady Bulldogs 40-31 in a key conference game Friday in Cowley.

The win kept the Lady Grizz just behind conference leader Greybull in the Five Rivers Conference standings. Greybull is undefeated at 4-0, and Rocky is 2-1. Lovell beat Shoshoni Saturday to improve to 1-2.

Lovell got off to a strong start Friday as junior shooting guard Paige Bischoff drained a three-pointer and scored on an in-bounds play to put the Lady Bulldogs up 5-0. After a bucket by Timmons for the Grizz, a free throw by Madison Bryson and a transition bank shot by Mikkel McIntosh put Lovell up 8-2. A trey by Maddy Hocker, a free throw by Timmons and two free throws by Tori Steed knotted the score 8-9 before the treys by Townsend and Timmons put Rocky up 14-8.

“I was really impressed with how the girls handled that (being down 8-2),” said Rocky coach Eric Honeyman. “They could have said ‘we’re beat’ but they didn’t.

“That shows they’re fighters. They get down, but they don’t get discouraged. They just fight harder.”

Lovell cut the lead back to two, 14-12, on a power jumper inside by Mandi Jo Baxendale and a jumper by Alea Mayes, but Rocky responded with a drive by Townsend and a trey by Gabie Christensen, and Rocky went on to lead 23-18 at the half.

“They did hit some timely three-point baskets, which was the difference in the final score,” Lovell coach Chris Edwards said. “Our inability to score for long stretches of the game was really the hampering factor for our girls. I give Rocky’s defense credit. They are long and physical and do a good job protecting the paint.

“We had stretches where we were not real patient on offense, which led to turnovers or poor possessions. We just didn’t hit the mid-range or three-point baskets when we had opportunities, but those were the shots Rocky hit that ended up being the difference. Our defense played really well in both games this weekend, but our inability to create offense is hurting right now.”

Honeyman said his squad shot well against the Bulldogs.

“When you have shooters with confidence it’s fun to watch,” Honeyman said. “Their percentages are creeping up each week, and we have girls that are not afraid to shoot and are confident in their shooting.

“The girls were very patient in their offense. I was really impressed with our guards. They really drove the ball.”

Rocky gradually pulled away in the second half, outscoring Lovell 8-5 in the third quarter and 9-8 in the fourth.

“Our defense was pretty solid,” Honeyman said. “The girls were very confident in their shooting. I thought we handled Lovell’s press pretty good. We expected them to try to man us up pretty good. I thought our guards handled the ball pressure and did their job.”

Townsend led the Lady Grizz in scoring with 12 points, and Timmons added 9, Steed 8 and Hocker 5. Townsend and Christensen led the team with five rebounds each, and Townsend added five assists.

“I thought Teagan played her most complete game,” Honeyman said. “Her free throw points at the end were crucial. She hustles and works non-stop.

“Tori and Brenda both played very solid. They were active at the hoop.”

“I thought all in all it was a pretty good team win,” Honeyman said. “I was very proud of the girls. They played hard and it was a solid game. We had to against a really good team like Lovell. Coach Edwards always has that team ready to go and it’s not easy to get a win against them.

“To get that second conference win was good. It puts us back on track.”

“I really thought Mandi Jo battled hard all night long,” Edwards said. “I thought she played a complete game at both ends of the floor. Mikkel ended up with 10 rebounds from the point guard position, which showed her desire to contribute to our team.”

The Grizzlies will return to action this weekend with a pair of conference road games. The Grizz travel to Shoshoni Friday for games at 3 (JV) and 4:30 p.m. and to Basin Saturday for games at noon and 3 p.m. against Riverside.