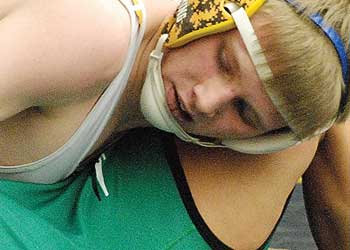 Meeting schools more their size, the Rocky Mountain Grizzlies found success at the Greybull Memorial Invitational Saturday, placing seventh out of 11 teams despite having only four wrestlers.

All four Grizzly grapplers placed in the tournament.

“How about them apples?” coach Daniel Robertson joked in a Monday interview. “We did just plain better (than the Ron Thon). We had a little bit different attitude as we went into the matches. We were a little more serious in the opening round, team wide, and a little more focused. The whole team had some attitude about them.”

Freshman Tonka Lytle won the championship at 126 pounds. After two byes, he made quick work of two opponents, pinning Evan Habeck of Powell in 1:25 and sticking Hunter Garoutte of Moorcroft in 1:07 to take the title.

Lytle has wrestled Garoutte three times this season and now holds a 2-1 edge, Robertson said, having split with him at the Moorcroft tournament Jan. 19-20.

Lytle picked up two points early with a takedown that carried the wrestlers out of bounds. Up 2-0 as the two returned to the center of the mat, Lytle then turned Garoutte, made a move and executed the pin.

“It was pretty calculated, almost machine-like,” Robertson said. “There wasn’t much to it. Tonka was pretty ready for that one. It was his first tournament title. He was pretty excited.”

Junior Nathan Hatch placed second at 170 pounds. After a bye he pinned Dekken Mayer of Moorcroft in 1:03 and Parker Schlater of Moorcroft (28-10) in 1:17, then faced Josh Jones of Cody for the title, falling on a pin in 1:41.

Robertson said the win over Schlater was a good win, noting that there are two Schlater brothers who wrestle for the Wolves at 170 and “both are dang solid kids.”

“Nathan went after him and got the early takedown, which took the kid out of his game plan,” Robertson said. “He caught the kid completely off guard. Nathan wrestled Nathan’s match, which was really good to see. He pinned him hard.”

Junior Travis Lytle placed fourth at 132. After a bye, he pinned Sean Williamson of Lander in 2:52, then battled Corey Linebaugh of Powell in the semifinals, falling in 5:23. He came back to beat Kayden Heil of Lander 8-3 to advance to the third-place match but had to forfeit that match.

“He wrestled real well,” Robertson said, “except the Linebaugh match was a match he should have won. The kid has a good cradle move and Travis let him put it on him. Against Heil it was a pretty solid match where he beat that kid. He was very solid. He took really good shots, and when it went into the third period the Lander kid started falling apart and Travis didn’t.”

First-time high school wrestler Wyatt Horrocks, a senior, placed for the first time in his young career, finishing fourth in Greybull at 160 pounds. After a bye, he edged Colter Collver of Wind River 18-16, fell to Rowdy Pfeil of Moorcroft in 22 seconds, then came back to pin Shawn Erhart of Greybull/Riverside on a pin in 2:21. Wrestling for third and fourth, he was pinned by Justin Marden of Moorcroft in 1:55.

Robertson said Horrocks wrestled well in Greybull, noting that the quick loss to Pfeil wasn’t a bad loss by any means.

“Pfeil is a stud,” he said. “He’s a bad man. He wrestled about two whole minutes the entire weekend. That (fourth place) was really neat. Wyatt has done well this year when he goes to Greybull (including an earlier triangular).”

The Grizzlies are off this weekend as they prepare for the 2A West Regional Tournament being hosted this year by Wyoming Indian High School in Ethete. Schedules show a Friday-Saturday Regional, Feb. 16-17, but the tournament has been reduced to a one-day tournament, starting at 10 a.m. on Feb. 17.