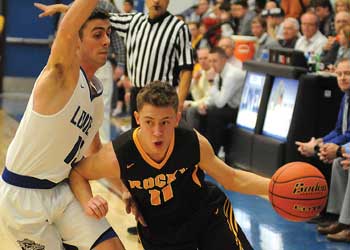 It was a big game with a big time atmosphere when the Rocky Mountain Grizzlies and Lovell Bulldogs locked horns in Lovell Saturday night, and both teams left it all on the court before the Grizzlies emerged with a 65-62 overtime win at Winterholler Gym.

“A couple of times I said to the team during a time out, ‘Isn’t this fun? Soak it in!’,” Rocky Mountain coach Pat Winland said. “I can’t think of a better way to prepare us for Regionals.”

The lead changed hands multiple times during the game, and players from both teams made big plays at key times as the two rivals went toe to toe.

“That core group of kids has been battle tested all year, and that’s something else I kept repeating to them: ‘You’re fine. You’re battle tested,’” Winland said. “Obviously, we caught some lucky breaks, but we also gave them chances to win.”

Lovell coach Craig Lundberg said his team played well for the most part but at times got caught up in the excitement.

“We played really well throughout the game until a little spurt toward the end when we made some uncharacteristic mistakes,” Lundberg said. “It was two good teams just battling it out. It was back and forth, a see-saw.”

Lovell came out strong at home and took an early 8-2 lead. After Rocky senior Tristan Jewell answered two Brent Snyder free throws with a fast-break basket, Kyle Wolvington drained a three-pointer for the Bulldogs, followed by a Snyder drive and one of two at the foul line by Jeremy Schneider. Ethan Price hit a three-pointer for Rocky, but back-to-back treys by Wolvington around a Jewell drive boosted the Lovell lead to seven, 14-7.

“We put in a play to take advantage of Rocky’s aggressive help side defense, where they run a guy under the basket to stop penetration,” Lundberg said. “We, usually Brenden (Lundberg), would kick out to Kyle.”

Rocky scored the final six points of the first quarter to pull close at the quarter break as Lovell led 14-13, and after a trey by Price and an inside jumper by Jonathan Allred put the Grizz up 18-14 early in the second, Lovell responded with a 6-0 mini-run as Snyder hit a jumper, Ben Cornia executed a sweeping move and Wolvington popped for two. Lovell led 20-18 and went on to lead 29-27 at halftime.

Wolvington hit a trey from the top of the key to start the fourth quarter for Lovell, but a Jewell drive and a Lathan May trey gave Rocky the lead at 45-44. A baseline drive by Snyder and two free throws by Schneider put Lovell up 48-45, but a jumper by Price and an inside move by Taylor Winland gave Rocky the lead at 49-48 and Price rattled home a trey to boost the margin to four, 52-48 with under two minutes to play.

Lovell closed to within one at 52-51 and led 57-56 after two treys by Wolvington overcame two baskets by Winland. Cornia hit one of two at the line with 20 seconds left to put Lovell up 58-56, but Jewell hit two free throws with 13 seconds left to tie the score. A final designed play failed to produce for the Bulldogs, and the game went into overtime at 58-58.

“The final play never set up the way it was supposed to,” Lundberg said. “The kids kind of got excited, and a screen didn’t develop.”

Snyder fouled out early in the overtime period, but four free throws by Schneider put Lovell up by four, 62-58. In the final two minutes Jewell twice stole the ball and was fouled by a chasing Wolvington, who fouled out. Jewell hit three of four at the line to cut the Lovell lead to one, 62-61.

“Tristen did a good job getting a couple of steals that led to scores, and that’s on us,” Lundberg said. “We’re going to the ball and were throwing it backwards, where it would be tipped.”

With Lovell clinging to the one-point lead, Ethan Hessenthaler fired a three-pointer that missed, but Matt Savage snared the offensive rebound and was fouled with 1:04 to play. He missed both free throws and Jewell was fouled with 48 seconds left. He hit both shots to put Rocky up by one, 63-62, and after both teams had opportunities in the fourth quarter but turned the ball over, the Bulldogs had to foul with 16 seconds left and Price hit two at the line to put the Grizz up by three. A final Lovell three-pointer failed to connect.

All of the scoring in overtime came at the foul line as Rocky hit seven of nine free throws, Lovell four of six.

“After the game we had a team chat, a coach-led discussion that was maybe louder than usual,” Lundberg said. “We were able to sit back and discuss things we can learn from this game and build on. I challenged the boys to make a concerted effort to clean stuff up and hopefully they’ll accept that challenge.

“Tristan came up huge at the end of the fourth quarter and in overtime,” Winland said. “Also, Ethan came through with a great night of shooting. Taylor was able to hit some shots. We fortunately came out on the winning side, and it was a fun game, I hope, for both communities to come and enjoy.

“I thought Kyle was outstanding with his shot selection and leading his team, and I think Brent is one of the best mid-range shooters in 2A.”

Both teams will close out the regular season this weekend with conference games. Lovell travels to Shoshoni Friday and hosts Riverside Saturday for 4 (JV) and 7 p.m. tap times, and Rocky will host Shoshoni Saturday at noon (JV) and 3 p.m.