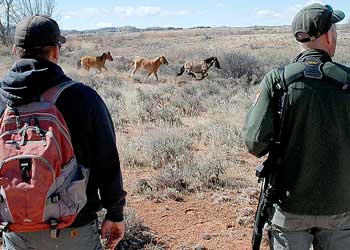 “Entering Wild Horse Range” reads a posted sign on the right of the cattle guard shortly after a care drives into the Bighorn Canyon National Recreational Area while on the left “the greeters,” a small band of wild horses, graze just beyond the pavement, nicknamed for their presence of “greeting” all visitors entering the park.

Bill Pickett, the National Park Service Natural Resource Program Manager for Bighorn Canyon, and Bureau of Land Management Range Technician Ryan Bradshaw from the Billings Field Office pull into the parking area across from “the greeters” and start preparing gear for darting the Pryor herd mares with a contraceptive, which in recent years is the new proactive management practice for population growth in the wild horses, especially on the local Pryor Mountain Wild Horse Range.

“Roughly, we cover 30,000 acres, and the Park Service is BLM’s partner in this project,” explained Jerrie Bertola, BLM Project Leader for wild horses and burros in Montana and the Dakotas at the Billings Field Office. “That is not always common for Park Service partnering in managing wild horses. We have a unique partnership with the Park Service here. There are places that use volunteers for their darting programs, but here we use BLM and Park Service agency people.

“A lot of people think having a darting program can be done anywhere, but we want to show the effort that goes into a successful day, which can be one horse, and which usually takes a lot of effort.”

Historically, the Pryor Mountain wild horses were not always managed by government agencies.

“Local ranchers were basically the ones managing horses on public lands, whether they were called mustangers, or whatever they wanted to call themselves at the time – basically they kept the population in check,” Bertola said. “A lot of times they would send out their own breed stock to supplement those herds, so when the acts passed the horses had to be claimed.”

In 1968 a secretarial order came from Washington designating areas principally as wild horse ranges, but not excluding recreational use and other wildlife inhabiting the area. Once designated, the Pryor Mountain Wild Horse Range has a uniquely shared jurisdiction between the BLM and Park Service, which is uncommon across the U.S. Later, in 1971, the Wild Free Roaming Horses and Burros Act created some foundational guidelines for BLM management of wild horse ranges with additional specifics laid out in other acts in 1976 and 1978.

Over time, public interest in wild horses grew strongly, but unlike the thousands of wild horses roaming the range across the West, the Pryor Mountain wild horses are arguably the most well-known herd. A higher percentage of colonial Spanish bloodlines, dating back to the Spaniards importing horses to America, is found in this herd. Also, the documentary “Cloud – Wild Stallion of the Rockies” significantly increased popularity. Sustaining not only this herd but hundreds like it requires new management practices.

Recently, administrating birth control to female wild horses for population control started when the BLM found a national imbalance between available land and the number of horses through the BLM’s appropriate management level (AML) calculated for 26,000 horses. Currently there are 78,000 wild horses roaming the range, and without population control this number can double every four years, the BLM says. Additionally, 40,000 to 50,000 wild horses removed from the range and not adopted at auction live the remainder of their days in BLM’s long-term holding pastures. The Pryor range AML is 90-120, and the most recent count indicated 155 horses on the range as of March 1, 2017.

In recent years, public opinion has disapproved of helicopter roundups, and even with the high wild horse adoption demand, it is still not enough to balance the scale of extremely high population growth and adequate food availability on the range. Devising new strategies for herd management became a necessary step for the BLM in overseeing the wellbeing of the wild horses.

Now with the development of the nonhormonal drug Procine Zona Pellucide (PZP), a treatment for controlling excessive population reproduction is administered through the low stress and low impact process of darting. In the event a mare is pregnant upon treatment, the drug does not harm the foal.

“The drug actually, in real simple terms, coats the egg, so the mares will still cycle normally, but the sperm cannot penetrate,” Betola said. “Right now we are implementing the environmental assessment for fertility control completed in 2015, which allowed for us to do multiple year administration of PZP… and right now we are treating any mares generally from 2 to 4.

“Two-year olds will receive an initial primer, and then they are boostered after at least two weeks. They then receive the booster on an annual basis until 4, then at 5 they come off of the fertility control. Our hope is that they will foal between the ages of 5 to 9. That’s the best time we can get genetic diversity back into the herd, so hopefully they will foal in that window, and at the age of 10 they go back onto fertility control.”

In general, the drug shows most effectiveness during the winter months, but with difficult weather conditions darting usually begins around February and can last until June. Darting is done by trained and certified officials, such as Pickett and Bradshaw, receiving training at the Science and Conservation Center at Zoo Montana in Billings.

“Our main overarching goal is a thriving natural ecological balance and leaving a healthy self-sustaining population,” Bertola said. “The goal of the Pryor herd is to balance that birth and death loss.”

A day on the range

Starting out the morning, Bradshaw removes the chilled PZP from the insulated case at the truck and mixes a 1 cc combination of ½ cc of PZP and ½ cc of the antigen and injects it into the dart, minutes before tracking the mare.

As soon as Pickett and Bradshaw check their sheets for the high priority mare of the day, Prima, a little blaze faced red dun, they hike across the road toward “the greeters.” During darting season, the chart prioritizes all the mares in order, from high to low, based on which one needs the primer or booster of the PZP before she would cycle for breeding.

Daily communication happens between the BLM and NPS offices, ensuring awareness of where the darters are headed, and the priority mares for the day, reducing the risk of a mare being darted twice in a day. Additionally, detailed paperwork must be filed daily stating who prepared the dart with the PZP, who fired the dart and the distance from which the horse was injected with the contraceptive.

Within minutes, Pickett slowly approaches the grazing herd, taking a knee and lining Prima’s hip in his scope. While there isn’t much cover with the tallest brush being the sagebrush, he stalks the herd and quietly takes aim as many hunters do in the fall. Prima, who was facing him on the profile, allowed for a clear shot to the right hip. He fired the dart, and she received the treatment.

“I was 30 yards out. She just stood there for me, quite unusual, but worth it,” Pickett said.

Above the needle on the dart is a florescent green cap easily spotted on the ground, so the darter can know if the treatment was successful or incomplete.

“Behind the green plunger there is a red cap like on a cap gun, and inside it sets off the plunger and moves forward and injects the PZP, after which the dart immediately falls out,” Pickett said.

Next on the list is Icara on Mustang Flats, and once the dart is prepared, Pickett and Bradshaw make their way through the sage brush to the small band in the distance. It does not take long to come upon the band, however, the little group stays on the move.

Pickett and Bradshaw keep pace with the group for several minutes, but another mare, Morgana, keeps impeding the process by walking in front of Icara whenever Pickett is ready to shoot. Making tracks back to the pickups, it is back to the greeters for the next mare on the list, the elusive Seneca, well known for playing hard to get.

Ironically, the rifles used for darting are air rifles, similar to the 12 gram Co2 cartridge kind purchased at Walmart. It is claimed the rifle could shoot the dart from 40 yards, but after much practice both Pickett and Bradshaw prefer to shoot from 30 yards or less. Using a range finder is imperative not only for documentation but for setting the PSI count on the rifle before firing.

“We shot the gun till we felt like it had a soft enough arch so it wouldn’t hurt the horses, and not hit too hard. Taking a range finder and checking before you line up and shoot is very important. I don’t usually shoot over 30 yards, ensuring more accuracy,” Pickett explained.

Back at the greeters, Seneca lived up to her reputation of sidestepping the plan for the day. She stayed on the move, staying about 40 yards away as Pickett and Bradshaw kept up pace with the band. Occasionally, the herd halted, but the mare always faced away, not leaving a clear shot. The chase continued for more than three miles until the band finally took off, bringing an end to the day.

This is the sixth year of darting on the Pryors.

No growth indicates an equilibrium between newborns and those dying each year.

Has the many man hours of hiking on foot following the bands, and using the contraceptive on schedule mares, significantly changed the management issues the BLM has faced?

“Look at all the restoration we would have to do because of overgrazing. So, we have slow days like this, and some days we get six to eight horses and it starts adding up really quickly. In 2012 we had to remove 37 horses,” Pickett said.

After the count last year, with no growth, there was no need to remove additional horses off the Pryor Mountain range because of high birthrates.

“Yes, our ultimate goal with our fertility control is to balance our birth and our death loss,” Bertola said. “We have not got it fine tuned perfectly, but that’s our hope, that we can get to a number hopefully within our AML and we can manage the population with fertility control so we are not having to take and remove a lot of horses.”