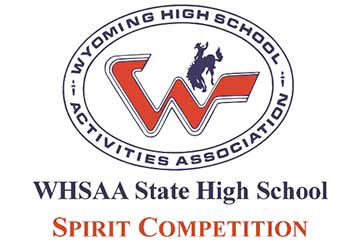 Just before the Class 3A/4A State Basketball Tournament tips off next week, hundreds of dance and cheer teams will take center stage on Wednesday, March 7, for the Wyoming State Spirit Competition.

Four local teams will compete once again this year: the Lovell High School cheerleading team, coached by Renae Miller, the Rocky Mountain cheer squad, coached by Sally Bernhisel, and the LHS jazz and hip hop dance teams, under the direction of LaraLee Reber.

The Lovell cheerleaders will be defending their state championship in the 2A Non-Stunt Division, and Coach Miller has a veteran squad to compete with, with five seniors (including one alternate) to lead the way.

The LHS routine was choreographed by Lovell graduate Chelby Lewis, a senior on the University of Wyoming cheerleading team.

“We like our cheer,” Miller said. “It’s more high energy than last year, and we think the dance is modern and our formations are really good. We think she (Lewis) did a really good job choreographing.

“The girls have worked really, really hard, I think they’ll do well.”

RMHS grad Melissa Bernhisel choreographed some of Rocky Mountain routine, but the team members themselves also “did a lot,” Coach Bernhisel said.

“I like that it’s just really fun,” Bernhisel said of the RMHS routine. “The girls love the routine, and they love the ‘Hometown proud’ music. I like seeing them have fun, and that’s all that matters.

“Our season is longer than the basketball season, and the girls work hard. State Spirit is just a subjective blip in time.”

The newly revamped Lovell High School dance team is again coached by LaraLee Reber, who said both the jazz and hip hop routines were choreographed by Jennica Meclure, a former BYU Cougarette.

Unlike the cheer teams, the Lovell dance team competes in Class 3A, with the jazz dance performance first at 4:58 p.m.

Reber said the jazz dance routine has a rain theme, adding, “It’s very bubbly, fun, upbeat and sassy. It’s a very technical routine with lots of turns and leaps. The girls have had to work hard to get the choreography perfected.”

“It’s very hard-hitting,” Reber said. “It has an inmate theme. They have to be very precise with their movements but at the same time make it their own. They must show their individuality while working together as a team.