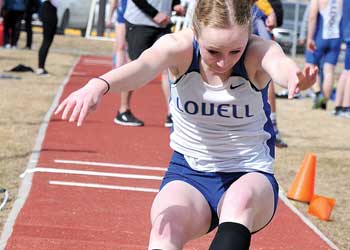 The Lovell Bulldogs battled with the big boys at the Yellowstone Sports Medicine Invitational Saturday in Cody, and the Lovell boys showed their depth with a second-place finish.

Only Class 4A Sheridan topped the Bulldogs with 144 team points, but Lovell was a solid second with 107.5 points, finishing ahead of Cody, Powell, Riverton, Worland, Lander, Buffalo, Thermopolis and Meeteetse.

“It feels great. I knew we had a strong team, but several freshmen also showed really well, which adds to our strength. Several of those freshmen will be able to compete.”

Coaches named senior Dylan Hereth as the male athlete of the week for his performance in Cody. The thrower placed second in the shot put with a personal-record throw of 43-4 and fifth in the discus with a toss of 123 feet.

“I was glad to see him do this well,” Sanders said. “He’s a hard worker. He’ll do anything asked of him.”

Fellow senior Frank Minchow placed fifth in the shot put with a throw of 40-6 (a PR) and seventh in the discus at 116-10, also a personal record.

“Tracks aren’t painted correctly (for the event), so the second 200-meter runner has to run further, which worked well for us,” Sanders noted.

Senior Logan Hitz surprised coaches with his performance in the long jump as he placed fourth with a jump of 19-8. He also placed fourth in the triple jump, sailing 39-4 ½.

“Logan showed us something in the long jump,” Sanders said. “A 19-8 surprised us. He was fourth in the triple jump with five fouls (in the competition) because the wind was so strong. I think it was messing with him.”

Junior Brenden Lundberg placed fifth in the triple jump with a leap of 39-3¼ and sixth in the long jump at 19-3½.

Senior Ben Cornia placed in all three of his events, Sanders noted: second in the 300-meter intermediate hurdles with a time of 44.61, third in the 110-meter high hurdles at 18.09 and fourth in the high jump with a leap of 5-10.

“He scored a lot of points and can do even better,” Sanders said.

Lillard raced to a fourth-place finish in the 100-meter dash, zipping the straightaway in 11.68 seconds, and freshman CJ Lindsay was sixth at 11.85.

Lovell went 2, 3, 4 in the 200-meter dash, although Sanders noted that the times were slow because athletes were “running into that huge wind.” Lillard placed second with a time of 24.19, Porter Nichols third at 24.41 and Lindsay fourth at 24.50.

“He showed us he can be a good mid-distance guy,” Sanders said. “He can do really well if he’ll invest himself in it.”

Yet another freshman, Tyler Nichols, placed third in the 300-meter hurdles with a time of 45.26 and nearly placed in the pole vault by clearing 11-6, good for ninth place. Senior Brent Snyder tied for fifth in the pole vault at 12-1 but has nearly maxed out his regular pole and needs to move on to a new pole he started working with last season, Sanders said.

Other top boys results Saturday were:

The athlete of the week for the Lady Bulldogs is junior Megan Cornia, who blew away her PR in the triple jump and won the event with a leap of 33-10½, easily pre-qualifying for the state track meet. She also placed fifth in the 100-meter dash with a time of 13.91 and sixth in the 200, crossing the finish line in 29.38.

“First, her technique is good. Second, she’s just faster,” Sanders said of Cornia’s “best yet” performance in the triple jump. “And she placed well in the 100 and 200. She’s just faster. The triple jump is a good event for her. She knows how to do it.”

Sanders said the Lady Bulldogs were missing a few competitors due to illness or because they didn’t have enough practices under their belt.

Junior Karlee Burton battled the wind to a time of 6:03.51 in the 1,600 meters, good for fifth place, and senior Jessica Caldwell also fought through the conditions to place third in the 3,200 with a time of 14.16.

“Jessica said it was better running at State in a snowstorm than it was out there (in Cody),” Sanders said.

The Lovell thinclads are off this weekend and will return to action Saturday, April 7, at the L.A. Kohnke Invitational at Powell High School.

Other top girls results Saturday were: