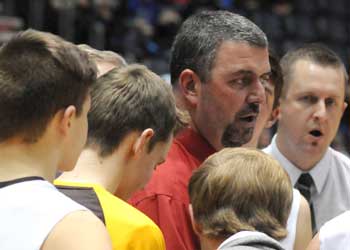 Not a bad start to a head coaching career.

coach of the year last week after leading the Grizzlies to a 23-4 record and a third-place finish at State.

A longtime assistant to former head coach Michael Simmons, Winland assumed the reins of the program last summer after Simmons took a job in California.

“He did an awesome job of managing the team and everything that goes with it,” said Rocky Mountain athletic director Tobee Christiansen. “I thought the kids played well for him and responded to him well. He does a great job with organization. They had a great season, and it was fun to watch.”

Christiansen said Winland had a good mixture of discipline and letting the veteran team run during the season.

“He let ‘em play a little bit free, but at the same time he made them toe the line,” Christiansen said. “It was a good mix for this team.”