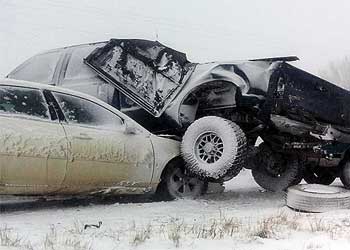 A sudden and powerful storm that blew through the north end of Big Horn County on Monday afternoon caught motorists off guard, resulting in numerous wrecks.

Big Horn County Sheriff Ken Blackburn said his department received an alert from the National Weather Service earlier in the day about a storm that blew in around 3:30 p.m. on Monday.

“We were mentally prepared for the fact that we were going to have some weather in the afternoon, but I don’t think anyone expected it to be quite as severe as it was,” said Blackburn. “A person could have been in Lovell and it was nothing compared to how it was west of Byron or north of Deaver, because the band seemed to hit certain areas worse than others. It brought literally whiteout conditions. Visibility was less than one delineator post to another. The moisture that had been coming throughout the day, combined with the winds that hit, dropped the temperatures to a bitter cold and turned the roadways into a skating rink.”

Blackburn said the first call his department received was from a motorist in the Deaver/Frannie area. The call came in through the On-Star system and the dispatcher taking the report was unable to get much information, explained Blackburn.

“All the dispatcher could hear is screaming in the background. Fortunately, our office has GPS location capabilities, which helped us determine where the call came from,” said Blackburn. “Our dispatcher tracked it to somewhere around mile marker 252 or 253 on Highway 32 in the Deaver/Frannie area, which is where the worst of the accidents took place.”

The Deaver-Frannie accident involved five vehicles and was described by first responders at the scene as a “pileup” with vehicles literally on top of one another.

Eight members of the Deaver-Frannie Fire Department were among the first at the scene, along with numerous sheriff’s deputies and troopers from the Wyoming Highway Patrol and Blackburn.

Clayton Malson was among the first firefighters at the scene of the crash. He said it was one of the worst pileups he’d seen. He noted that in addition to the vehicles and a semi-truck that had crashed into one another, it appeared that several other vehicles slid off the road while trying to avoid the crash.

Malson said people were out of their vehicles walking around when he arrived at the scene. He said, since visibility was so poor, he and other responders at the scene blocked the road to keep other motorists from crashing into wrecked vehicles, which were now blocking the highway. He said a temporary shelter was set up for accident victims at the Port of Entry building in Frannie, where they were transported for safety. While at the shelter two ambulances arrived. Malson said some victims complained of neck and back pain. Four were transported to North Big Horn Hospital in Lovell.

“The visibility and roads were so bad the accident was almost unavoidable,” he said. “It was amazing that there weren’t even more injuries.”

Blackburn said the poor visibility caused motorists to slow down or stop on the highway. He said, as other motorists came upon them, they were unable to stop due to the slick road conditions, causing numerous fender benders. He said in many cases the cars crashed into one another at slow speeds, while others slid off the road to avoid them.

Lovell Fire Department volunteer Mike Jameson, Sr. was the first to arrive at the Byron crash site. He said the visibility was so poor when he reached the Oasis Junction that he could only see to the end of the hood on his truck. He said he had to pull onto a side road at one point for his own safety.

Jameson said eight cars were involved in the Byron crash. Miraculously, no one appeared to have serious injuries, though one driver complained of chest pain/and was transported by ambulance to North Big Horn Hospital, he said.

Lovell Fire Department Captain Bob Mangus arrived at the Oasis Junction in a fire truck around the same time as Jameson. He said visibility was so poor when he arrived that he was unable to see a wreck blocking the road just a half mile ahead of him. He continued slowly on Highway 310 toward Cowley, coming upon a two-vehicle wreck blocking the roadway, at least two other vehicles that had slid off the road to avoid the crash and a semi-truck jackknifed across the highway.

“The weather was some of the worst I’ve ever seen,” said Mangus, who grew up in the area and has been a firefighter for many years. “The road was so icy and the winds were so strong they blew me over when I got out of the truck. It was a complete whiteout. You could barely see someone right next to you.”

Mangus said none of the accident victims at the scene appeared to require medical attention. To keep them safe, first responders immediately blocked the roads to avoid other crashes from happening.

“I think it’s fair to say that this was some of the worst visibility conditions seen around here in a long time,” said Blackburn. “It took about two hours to get the roads cleared and people moving again. There were literally hundreds of vehicles backed up in certain areas. In some locations, responders acted as pilot cars to lead vehicles around the scene.”

Blackburn noted that with so many vehicles involved, he was amazed that so few victims required transport to hospitals, describing it as “nothing short of a miracle.”

“There had to be at least 30 vehicles involved in either accidents or slide-offs during the storm just in this area alone,” said Blackburn. “To put it into perspective, going too fast for the conditions in this case meant going over one mile per hour. With that said, I think people did a great job of slowing down, which is why the kind of injuries that could have happened, didn’t happen…In many ways, it was like a divine intervention that this didn’t turn out worse than it did.”

Blackburn commended all of the responders from local police officers to firefighters, troopers, deputies, ambulance crews and even the wreckers who helped pull vehicles out of ditches for their quick response and seamless work as a team to help the victims at the various accident sites. He said he was sure that one local wrecker, Jay Burnham, even pulled some vehicles out of ditches without charge.

“These people are heroes as far as I’m concerned,” said Blackburn. “There were far more victims than there were rescuers and they did a great job getting to everyone as quickly as they could.”

Though the storm cleared after about two hours, Blackburn noted that some responders were still checking for victims up to four hours later to be sure no one was left behind.

“The storm tested and stretched the limits of rescuers in Big Horn County,” said Blackburn. “This undoubtedly would have been much worse without them.”