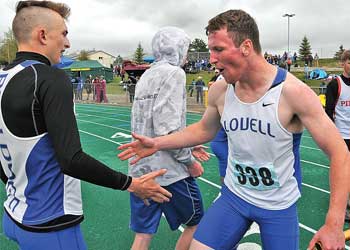 Showing the team’s talent, depth and preparation, the Lovell Bulldogs repeated as Class 2A track and field state champions over the weekend in Casper, pulling away from a tough field to win by more than 50 points over 2A East foes Big Horn and Pine Bluffs.

A strong senior class augmented by younger athletes powered the Bulldogs to the title as Lovell piled up 134.33 points to 83 for Big Horn and 82 for Pine Bluffs. Seniors Porter Nichols, Will Lillard, Brent Snyder, Ben Cornia, Dalton Nixon, Dylan Hereth and Logan Hitz combined to score 90.33 points in a variety of events for the Bulldogs, but junior Brenden Lundberg, sophomore James Caldwell and freshman CJ Lindsay also recorded double-figure scoring at the state meet.

Coach Joshua Sanders said the team has come on strong since the seniors’ freshman year.

“With this group, the senior group, hardly any of them made it to State their freshman year. Brent (Snyder) was the only one,” the coach said. “That motivated them, maybe more so than it normally would. When you experience too much success too early, it can make you soft. This group was tough, and they’re track guys. Most of them did indoor track.

“I can remember Dalton Nixon missing out on being on a relay team as a freshman in the 4×8 (3,200-meter relay). All of them did amazing things (this year), but to use Dalton as an example, Friday was brutal at state track for what we asked him – and others – to do, the races they had to run back to back to back. By the time we were done I looked at some of the athletes and said, ‘Man, we bled that cow dry.’”

Rising to the occasion

Noting that 12 athletes scored points at State for the Lovell boys, Sanders said this year’s title was a true team effort, though the team had great talent.

“It wasn’t just one person or one group,” he said. “It wasn’t like we were taking two athletes and getting 80 points out of them. You can do that. But they elevated their performance from Regionals to State. We had calculated the points after Regionals, and trust me, how it was looking is not how it turned out. It looked like a separation of four points between Lovell and Big Horn.

“We won by 50 points and it wasn’t against weak competition. Those (Big Horn and Pine Bluffs) were two solid teams.”

“Porter planned his races and was more strategic this week than he was the previous week,” Sanders said. “In the 800 and 400 he beat the two kids who beat him last week. He was the one who was hunting them, so to speak.”

Nichols placed second in one of the great races of the track meet, the 800 meters Friday morning, placing second with a time of 1:58.34, less than half a second off his personal record and bested only by Southeast senior Chase Lovercheck, who won with a time of 1:57.39.

Fellow senior Dalton Nixon placed a strong sixth with a personal record time of 2:00.75, and there were three other runners who ran under two minutes for a total of five of the eight placers.

“How deep was that?” Sanders marveled. “I haven’t seen a 2A 800 that deep since I’ve been involved (in coaching at Lovell). Dalton Nixon runs a 2-minute 800 and places sixth. Two minutes usually wins.

“There were so many close 2A races across the board. 2A was really tight in most of the races.”

Nichols and Nixon each ran a leg of the 1,600-meter medley relay Friday that set the state mark for the new event with a first place time of 3:38.82, running with sprinters Will Lillard and CJ Lindsay, and they were two strong parts of the 1,600-meter relay team that capped off the meet by winning the mile relay and tying the school record time of 3:31.11 set last year. Also running the 4 by 4 were Ben Cornia and Brenden Lundberg. They tied the record set a year ago by Kaleb Mayes, Nixon, Lillard and Nichols.

“Dalton is the glue for us,” Sanders said. “We don’t have those successful relays without Dalton, and he epitomizes what that group is all about. He worked his tail off to become a tough athlete.”

Senior Will Lillard won his first individual title Saturday morning, edging a tough field to win the 100-meter dash in a time of 11.67 on a chilly morning after running 11.48 in the prelims Friday.

“I felt so bad for him after the sprint medley Friday (team disqualified due to a dropped baton),” Sanders said. “Dropping the baton happens in that event, but he’s a senior and up to that point he hadn’t won a state championship. We knew doing it in the 100 or 200 would be tough.  Coaches were so happy for him when he won the 100.

Sophomore James Caldwell had an outstanding meet, placing second in both the 3,200- and 1,600-meter runs and running with Ben Cornia, Tyler Nichols and Zeke Newman on the third-place 3,200-meter relay team that covered the eight laps in 8:41.61.

Caldwell enjoys running in warm weather and took advantage of conditions Thursday to place second in the 3,200 to senior Louis Failoni of Kemmerer with a personal record time of 10:44.08. Then on Saturday afternoon he ran with the upper pack and again finished second to Failoni with another PR in 4:47.30.

“We knew what he could do in the two mile, but what he did in the mile was maybe more impressive,” Sanders said. “He did an excellent job of not panicking early in the race and working his way up and making it a race with the Kemmerer kid at the end.”

Senior Brent Snyder won his first state title in the pole vault Friday by clearing 13 feet and winning a “vault off” against Adam Willoughby of Big Piney, his second tie-breaking, sudden death competition in two weeks.

“How cool is that? Brent loses a tie-breaker at Regionals and gets the same kid and situation at State and wins a vault-off,” Sanders said. “The two had the same number of misses, and they raised and lowered the bar and the first one to miss loses.”

“It was a challenge getting him on to the mean green,” Sanders said of the new pole. “There were some doubtful times, but he stuck with it.”

Snyder also placed fourth in the triple jump Friday morning with a leap of 41-7, his longest jump of the season.

“He was a 10th of a second away (from the record),” Sanders said. “It’s really neat that Ben ran his best race in his last race. He just looked good in that race. He’s a key cog in the relays, too.”

Cornia battled with the best in the high jump Saturday and eventually placed fifth, clearing 6-0, and he ran on both the mile and two-mile relay teams.

Junior Brenden Lundberg placed second in the triple jump Friday morning with a leap of 42-2, just one inch off his personal record set in Lander the week before. Sanders said Lundberg has come on strong this season.

“There was a change from his sophomore to his junior year,” he said. “He’s more focused, works harder and he knows what he wants to achieve.”

Lundberg also placed eighth in the long jump with a personal record jump of 20-½ and ran a leg of the winning mile relay team.

Freshman CJ Lindsay burst onto the scene by placing in the 100 and 200 and running a leg of the winning medley relay. Lindsay placed fourth in the 100-meter dash Saturday in a time of 11.75 after running 11.59 in the prelims Friday. He also placed fifth in the 200 on Saturday at 23.60 after running a personal record time of 23.05 in prelims Thursday.

“I’m glad CJ was able to be with this group,” Sanders said. “He wants to do everything correctly, and he can be pretty hard on himself.  I’m glad he’s on our side and that we get three more years with him.”

Two other seniors ended their career on a high note. Thrower Dylan Hereth placed in both the shot put and discus, throwing the shot 44-8¾ to place sixth and the discus a personal record 136-10 to place fourth.

“There’s another one. Dylan didn’t place at all last year and saved his best until last,” Sanders said. “He launched that discus out there. That was a huge personal record. Coaches were like ‘Whoa!’ Sometimes you’ll see seniors not focused, and he’s the antithesis of that.”

Logan Hitz placed in three field events to cap his career. He placed fourth in the long jump by sailing a personal record 20-9½ and seventh in the triple jump at 40-9, just a half inch off his PR. He also tied for eighth in the high jump, clearing 5-8.

“Logan had his best jump in the long jump, too. It’s like everybody was giving it their best in the last meet. Logan didn’t place last year, and this year he places in three events.”

Other boys results at the state track meet were: