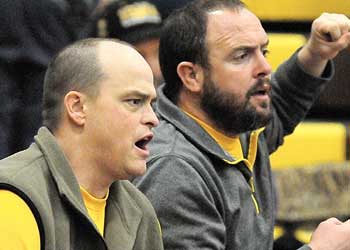 An educator and coach known for his passion and integrity is being mourned by the Rocky Mountain High School community this week.

Josh Collins lost his 10-year battle with brain cancer at home last Thursday, May 10, after valiantly continuing his teaching career at RMHS until the final weeks of his life.

Collins, 42, was the second son born to LeRoy and Gail Collins of Lovell. He grew up in Lovell and competed in wrestling, football and baseball, while also building an interest in politics and history, friend and colleague John Bernhisel said.

He graduated from Lovell High School in 1994, developing his love of wrestling from successful LHS coach Tony Mullins. He served an LDS mission in New Jersey, then graduated from the University of Wyoming with a degree in history education, later earning a master’s degree in school administration.

Collins enlisted in the Wyoming National Guard during college and served for six years, Bernhisel said, adding, “His love of country was always evident.”

He married Sarah Davidson of Burlington in the Jordan River LDS Temple in Utah, and Josh and Sarah are the parents of daughters Kalley, Maddie and Emma.

“More than anything Josh loved Sarah and his girls,” Bernhisel said. “Heaven for Josh was taking his family on horseback trips into the mountains to fly fish and enjoy nature.”

After starting his teaching career at Burns High School, Collins was hired by Rocky Mountain High School in 2003 as a history teacher and head wrestling coach. “He reached so many people through his passion for teaching and coaching,” Bernhisel said.

Collins served as the head wrestling coach at RMHS for 14 years before turning the reins over to Daniel Robertson this season. He also coached football at both the middle school and high school level.

In 2009, Collins was diagnosed with brain cancer, but he continued to teach and coach effectively while battling the illness. He taught social studies – U.S and world history, government and economics – until mid-March.

Asked what comes to mind when he thinks of Josh Collins, RMHS guidance counselor Tim Jones didn’t hesitate, saying, “His integrity. His competitiveness,” adding, “He was one of those guys who could mesh the two really well. He’d never cheat to win. Everything was straightforward. You worked hard to do your best.

“He had high morals, high intensity and was a lot of fun, with a dry sense of humor. He loved kids. He was able to draw kids in, and they loved to compete for him.”

As a coach, Collins was known as someone who could get the most out of his athletes.

“He worked them hard and conditioned them hard,” Jones said. “He pushed them. He definitely had kids in good condition.”

As a teacher, Collins “was fun,” Jones said, adding, “He had lots of interactive things and did a lot of projects with his class. He would come early to get ready for class. He was always early, early to prepare.

“He was a really, really good teacher. He helped kids get excited about topics.”

Asked about his battle with cancer, Jones marveled, “He was amazing. He was so determined to stay on course and not let it change who he is.”

Principal and former teaching colleague Tim Winland also had high praise for Collins, calling him dependable and
trustworthy, one who “dedicated his life to the teaching profession.”

Winland, too, said that Collins had “great integrity” and added, “Josh hardly ever missed a day of class, even while going through treatments, and even in the worst times he always got his stuff done. He was always very professional in his dealings with teachers and students.

“He rarely had discipline problems in his classroom and had really
good classroom management, which tells you a lot about how students felt about him. He had the students’ respect.”

“He loved to talk about history with the kids and got very excited and emotional,” the principal said. “We sometimes had to check on the classroom, he got so loud and excited about things. He also reached out to a lot of kids in a different capacity, as
a coach. He was a perfect fit for the wrestling teams we had.

“It takes a special person to be a wrestling coach. You have to be a recruiter and run a program that deals with all kinds of personalities. Josh was able to do that.”

Winland called Collins’ courage in dealing with cancer “unmatched,” adding, “I’m not sure anybody other than Josh knew the pain and suffering he had to go through. You wouldn’t know it by his teaching or coming
to work. He kept it to himself. He was physically strong but mentally strong, as well.

“As a coach, husband, father and teacher, he had my utmost respect for how he handled adversity in his life, and it showed in his faith in his Heavenly Father.”

Bernhisel noted Collins’ patriotism, saying, “He loved his country and I know he felt privileged to teach United States history and government. His service as a member of the Wyoming National Guard and later as a Scoutmaster exemplified his appreciation for the freedoms we enjoy here.

“Josh’s great legacy will be the lives of the young people he touched as a father, teacher, coach and scoutmaster. Throughout his difficult battle, he never lost his sense of humor, his wry smile or his willingness to think of the needs of others before his own.”

Collins built a firm foundation for many, Bernhisel added.

“His love of family, his positive outlook on life and his faith in the gospel of Jesus Christ were evident even when life was most difficult,” Bernhisel said. “He leaves his three daughters with a strong foundation of the importance of family and a deep love of learning, service and everything Wyoming.”

Services for Joshua Lee Collins will be held in the Lovell LDS Church on Thursday, May 17, at 2 p.m. with interment to follow at the Lovell Cemetery.