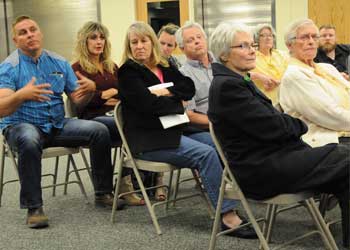 Lovell citizens came out in force Thursday night to discuss housing issues and specifically the proposed housing development at the site of the old hospital on East 10th Street on the hill in Lovell.

Most of the attendees at the public meeting were from the neighborhood where the housing project would be constructed, having been invited by Lovell Inc., whose director, Elaine Harvey, moderated the discussion.

Harvey spent the first part of the meeting detailing the need for housing in Lovell and how that ties into economic development, stating, “Let’s build something, shall we? We’ve evaluated and evaluated. It’s time to act.”

She noted the greenhouse project next to the Western Sugar Cooperative plant, a possible welding school for the area and a plant that would utilize local mineral resources that could employ 150 people but would need 35 new houses in the community before it could be constructed.

Harvey said, according to the Wyoming Business Council, 23.7 percent of the Big Horn County workforce commutes from out of the community and the county needs 649 additional owner units and 280 rental units to meet current housing needs.

She also said the average house in Lovell is 51 years old compared to Wyoming’s average of 42 years, and she said 69 percent of homes in Big Horn County were constructed before 1982, so many may not be up to code.

Over time a house increases in value and builds equity,” Harvey said. “Owning a home ties people to a community. Once someone owns a home in a community they stay there. And when you own a home, it builds pride.”

One key is a stable workforce, Harvey said, noting that the average cost to hire and train an employee in a manufacturing environment is $2,000, to it behooves a company for hired employees to stay in the community.

“Every employer who hires an employee invests money to train them, and if they move in and out due to the quality of housing, they do not stay in jobs. That cycle of a revolving workforce does not build stability. Home ownership helps stabilize the workforce, industry, business and the community.”

Another huge need in Lovell is rental units, Harvey said.

“When people rent in another community, when it’s time to buy, they stay (in that community) because they have built friendships, church ties and they want their kids to stay in the school district. Plus, there’s the winter commute.”

Harvey said she has worked with a landowner/developer who wants to build a bed and breakfast, ATV outlet, truck stop and Burger King, and the development could take place this year if water and sewer service could be built to the site west of Lovell, but the Town of Lovell doesn’t have the money to extend the infrastructure. She said Hampton Inns has also looked at Lovell for a hotel.

“People are ready and willing to invest in Lovell,” she said, “but it’s like I’m standing on the edge of a diving board and I can’t dive because there’s not enough water in the pool. Housing is one of the biggest things holding us back.”

She noted that Cowley’s new rental units that rent for $1,000 or more per month are full and have a waiting list.

“I hope I’ve proven the case that we need more housing in Lovell,” she said. “Where do we start?”

During the remainder of the meeting members of the public weighed in on the need for housing and the old hospital land project, known as Robin’s Nest.

Patricia Messamer asked why there are homes for sale in Lovell that aren’t selling, and realtor and Lovell Inc. vice president Sarah Johnson replied that the average number of days a house is on the market in Lovell is 180 but said there are many variables, with some homes selling quickly.

Former councilman Scott Allred asked why builders aren’t building on the many vacant lots in town. Harvey said Cowley has a culture that wants to grow and has the demand for housing, noting that there’s a difference between demand and need.

One citizen noted that a “nice park” where the hospital stood might make the area nicer and create demand for houses, noting that there are 12 houses for sale in a four-block area.

Having a strong housing inventory can actually be a good thing, Johnson said, because it gives potential purchasers lots of homes to choose from. “More selection is good,” she said.

Asked about other projects in town not filling up, Harvey said some had too many covenants or restrictions, and others had lots that are too small.

There was a lot of comment Thursday about whether to keep the Robin’s Nest project as a senior housing project or open it up to all buyers. Allred recalled the original plan that a senior housing development would open up family housing in town as seniors move from their family homes to the smaller units.

Harvey said one of the concepts Lovell Inc. has been working with is building twin homes which can be affordable but also have many amenities. Under one system, the homeowner would own the footprint of the duplex and a home owners association would own, and take care of, the grounds around the house, handling landscaping, watering and snow removal.

She said potential owners could choose a home that is good, better or best, depending on the kind of inside treatments they would like to see and can afford.

Area resident Ron McClure said it would be a good idea to keep the neighborhood consistent with existing structures, noting that the plan would have 10 homes across the street from where four are currently located. Rick Woodford said one of his big concerns is that “I don’t want other people’s boats and trailers in front of my house,” noting that the town needs to address that issue.

The issue of what and how to build seemed to come down to the issue of housing density, with Woodford and others saying the current plan may not be conducive to families with children. Harvey said that, while the town has lifted the restrictions on the project (not requiring senior homes) to give potential developers flexibility, the town could market the project as senior housing, noting that the plan lends itself to senior housing development.

Harvey pointed out that the Town of Lovell is the property owner of Robin’s Nest and Lovell Inc.’s goal is to bring people together to make things happen and help with marketing, setting up meetings, talking to contractors and bankers and setting up meetings, and she added that the project is dependent on “you wanting to do something.”

Allred noted that the town has put in infrastructure for housing development in the past.

Woodford said he would like to see a 55-year-old restriction for owners put in place, which he said would provide income stability for potential owners. It opened to young families, he said, the density of development would mean “25 to 30 kids running around” and no income stability, which would result in properties getting run down.

Johnson said new housing for Lovell is imperative for the town’s future and growth, noting, “I’ve seen the pain” of people having to leave their home and move to Powell.

“They don’t really want to go,” she said. “They leave against their will.”

“There’s a place for housing like this, but it’s too packed,” McClure said. “There should be room for the people who live there to live there.”

Harvey said she will continue to work with citizens to hear their ideas, adding that the project is phase I, and phase II is rental housing.

“Every community that has done this has reaped the benefit of the secondary market, but we need rental properties to get people to live in Lovell in the first place.”