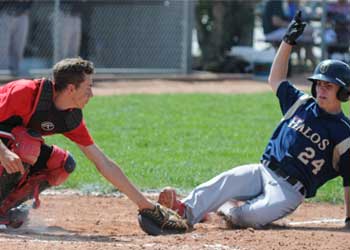 After Jeremy Schneider tied it, Kaleb Snyder won it as the Lovell Mustangs came from behind to beat the always tough Billings Halos in walk-off fashion Friday night at the American Legion Field in Cowley.

Billings won both ends of a doubleheader Saturday.

The Schneider and Snyder heroics gave Lovell a 6-5 win in a nine-inning game Friday night.

The Mustangs and Halos played five scoreless innings as neither defense would give an inch. Brock Hill started on the mound for the home team and put up five goose eggs on the scoreboard until Billings broke through in the sixth.

“That’s the best game he’s pitched all year,” Jameson said. “It was a clean baseball game and he pitched well. He pitched to contact and we made plays behind him. But he also had seven strikeouts.”

Billings finally got to Hill for three runs in the top of the sixth with runs scoring on a double steal, a sacrifice fly and a wild pitch. The Mustangs responded by plating two in the bottom of the frame on an RBI single by Snyder and a squeeze bunt by Ethan Hessenthaler to score Riley Hill.

Billings matched Lovell’s two with a pair in the top of the seventh before Schneider took the mound in relief of Brock Hill to snuff the Halos’ rally.

The score remained 5-2 Billings until the bottom of the eighth, when the Mustangs scored a pair to cut the lead to one, 5-4. Riley Hill got the inning going with a double, and Wyatt Horrocks singled. After Snyder reached on a fielder’s choice to load the bases, Dallen Mangus walked to force in a run and Juan Rivera lofted the ball to right field for an error and RBI to cut the lead to one.

After Schneider blanked the Halos in the top of ninth he tied the game with a one-out towering home run to left. After Riley Hill singled and Horrocks reached on an error, both runners moved up on a passed ball and Snyder drove in the winning run on an infield single as Hill beat the throw from shortstop to home.

“That was a big win for us, one we definitely needed to boost everybody’s spirits,” Jameson said. ‘It was an exciting win.”

Hill allowed five runs on eight hits and one walk in 6 1/3 innings of work, fanning seven. Schneider didn’t allow a run in 2 2/3 innings of relief to pick up the win, striking out six and allowing only one walk and no hits.

Schneider and Hill each went 3-5 for the Mustangs, and Snyder was 2-4 with a pair of runs batted in including the game-winner.

Despite the exciting win Friday night, the Mustangs came out a bit flat on Saturday morning and fell to the Halos 11-1. The home team stayed in the game early, trailing 2-1 after three innings, but Billings scored four in the fourth aided by three consecutive errors, one in the sixth and four more in the seventh to win by 10 as Lovell failed to score after plating a single run in the second.

“We came out flat the next morning,” Jameson said. “We had talked about trying to string good games together, but as well as we played the night before, with nine errors you’re probably not going to beat anybody. It’s frustrating to play so well in one game but then revert back (to old ways). It’s like we take one step forward and two steps back.”

Jameson did say the Mustangs were missing some players, especially in the infield, and a few players were playing out of position.

Jess Wambeke started on the hill and allowed seven runs, but only two of them were earned runs.

Lovell did have six hits, two each by Wambeke and Zane Horrocks, but Billings pitchers had zero walks and the Halo defense committed no errors.

Ezra Harlow and Dallen Mangus relieved Wambeke on the mound.

The second game of the Saturday twin bill was a stronger effort by the Mustangs, but Billings still won, 11-4. The game was tied 3-3 after the third inning and 4-4 after four, but the Halos got to starter Juan Rivera and reliever Branson Robison for five runs in the top of the fifth to take control of the game. Riley Hill took the mound to put out the fire, and Irving Castro mopped up in the seventh.

Schneider and Mangus led Lovell with two hits each, including a double by Schneider, and Schneider, Robison and Mangus each drove in a run.

“Branson has pitched at the B and C levels, and we wanted to mix some guys in and see how they do,” Jameson said. “I think it was nerves with Branson. He hit one batter and walked three. He can be a guy who will come in and be effective. He just needs to become a little more comfortable in those situations.

“But the main thing was that we couldn’t get key hits. We left eight on base. But it was close all the way until the fifth.”

The Mustangs were scheduled to play Glendive in a doubleheader Monday, but game one was scrubbed after an inning and a half in the rain.

“We tried to get it in (by starting at noon),” Jameson said. “It was raining from the get-go and got to the point where it wasn’t worth it even trying (to continue).”

Now 5-11, the Mustangs will travel to the Riverton Tournament this weekend. The schedule finds the Lovell B team playing Riverton A at 6 p.m. Friday, followed by the Lovell A team meeting Douglas Saturday at 8:30 a.m. The B team will take on Green River Saturday at 11 a.m., followed by Lovell A vs. Riverton B at 1:30 p.m. Pool play follows the scheduled contests Saturday evening and Sunday.