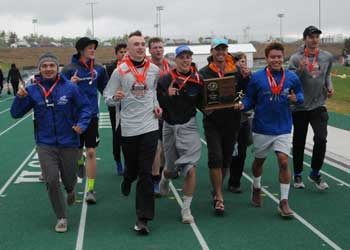 Depth, talent, hard work and overcoming adversity. All of these factors played a big role in helping the

A strong senior group of seven combined for 90.33 points in a variety of events for the Bulldogs. Help from younger athletes placing high in their events also

added to the team total and most importantly to the state title.

“We overcame a lot of adversity and had a lot of jumpers, sprinters, throwers and long distance runners,” Nixon said.

“It’s pretty important because we were seniors,” Nixon said. “It was cool to finish on a high note.”

Logan Hitz placed eighth in the high jump, clearing 5-8, fourth in the long jump by jumping 20-9½ and

seventh in the triple jump by jumping 40-9.

“I think our coaching staff was one of the keys,” Hitz said. “They worked a lot with us this year and made sure we had the technique and were not going into a meet blind.

“I think as a senior it’s pretty cool, because not very many people can say they’ve won a state

Dylan Hereth took sixth in the shot put with a throw of 44-8, and fourth in the

“I think everyone coming together and doing their best regardless of the conditions,” Hereth stated as a key component of the Lovell championship.

Hereth has signed with the Rocky Mountain College track and field team to throw the hammer and the shot.

“This title means that, no matter what kind of athlete you are, with hard work

and determination you can become a state champion or team champion,” Hereth said.

“I think just having a lot of depth in a lot of events,” Cornia said of the key to the title. “We had a lot of kids that were good in their events.

Brent Snyder won the pole vault, clearing 13-0, and placed fourth in the triple

Asked the key to success, Snyder replied, “I think everyone who participated in their events whether they scored points or prevented others from scoring points helped us win State. I’m glad to end on a bang and on a good note.”

Will Lillard won the 100-meter dash, zipping the straightway in 11.67 seconds, and he placed third in the 200-meter dash, crossing the finish line in 23.58 seconds. He was also a member of the 1,600 medley relay team.

“I think the key to our success was showing up to practice, working hard and learning to improve in our

events,” Lillard said. “Since we won last year, it was just another thing we wanted to win this year and we

Nichols said hard work was the key to the team’s success this year.

“It’s like a dream that became a reality because to do it once is luck but to do it twice it takes talent, hard work and skill,” Nichols said.