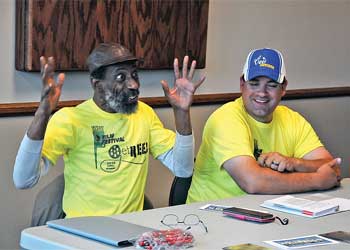 A sentimental film about tradition and changing technologies was judged the People’s Choice winner at the ninth annual Hyart Film Festival over the weekend in Lovell.

“Mail.Man” was the clear winner among festival attendees and also won honorable mention from judges in the drama category. The film received 55 votes from those attending one of the three sessions to 37 for “The Peculiar Abilities of Mr. Mahler” and 31 for “Rag Dolls.”

Made in Massachusetts, “Mail.Man” tells the story of Frank Bond (Bradley J. Van Dussen), a mail carrier who is in danger of losing his livelihood due to loss of mail volume from changing technologies in the Internet age.

A traditionalist, Frank loves the feel and smell of letters, even as they become fewer and fewer, and he engages in daily battles with a barking dog on his route as portrayed in a humorous scene. The movie is actually a blend of new and old methods of communication as Frank delivers a 40-year-old letter that had been lost behind a filing cabinet to an elderly woman. The letter had been written from Vietnam by her husband shortly before he was killed in action, and Frank reads the letter to her in an emotional scene.

But Frank also benefits from modern technology when he is filmed saving the life of the very dog that has been his nemesis on the mail route and the video is placed on social media. Asked what can be done for the “hero,” people are told to write him a letter because he “loves letters” and Frank’s home – and thus the little post office, as well – are deluged with actual letters.

Writer and producer William Aydelott told festival attendees following Saturday’s session that he, too, loves the printed word and feel of a letter or publication, but at the same time his career has benefited from modern technology.

Festival director Jason Zeller said he believes “Mail.Man” was popular because people can relate to the film.

“It’s very relatable,” he said. “It didn’t matter how old you are or how young you are, or how technical you are.”

Zeller said people of an older generation can relate to the film because it shows the love of letters they grew up writing and receiving, but the younger generation can also relate because of how social media is used in the film.

“Everyone can relate to it,” he said. “It made me laugh, and it made me cry.”

The second choice among festival goers was the German film “The Peculiar Abilities of Mr. Mahler” set in East Germany behind the Iron Curtain during the Cold War. Mr. Mahler is an investigator looking into the disappearance of a child and in the film is grilling the boy’s distraught parents and ends up accusing them of sending him to “The West.” He breaks down the couple in the style of Jethro Gibbs from “NCIS” or the FBI investigators in “Criminal Minds.”

“I think it really hit people at the end when they find it was based on events that actually happened,” Zeller said.

Zeller tried a new format this year where he and his committee chose the 10 best films and placed them in one block, which was shown three times, rather than showing 30 to 40 films with each session being different.

Attendance was mixed. There were about 65 people in attendance Thursday night, which was good for a Thursday compared to previous years, but only 65 attended Friday and 41 on Saturday. Over the years, Zeller said, the festival has averaged around 120 for a Friday session and 50 or so on Saturday afternoon, so attendance was down this year on the two days.

There was no Saturday night session this year, replaced by a concert featuring the band Onsense, which also drew an audience of only 40 to 45 people.

This year’s festival winners, chosen by a panel of judges, were:

Drama – “Sawubona” from South Africa, which also drew the highest rating from those screening films for the festival, about a little black girl and white boy becoming friends during the time of Apartheid. Honorable menion – “The Peculiar Abilities of Mr. Mahler” and “Mail.Man.”

Animation – “Nouvelle Cuisine” (Spain) about an energetic little chef who serves zombies to prevent them from eating humans.

Western – “Nine Mile Creek” (United Kingdom) about a string of murders playing out in the old west.

Science Fiction – “New Boy” (Germany) about a new boy in school whose classmates all possess virtual reality glasses but he doesn’t. He winds up teaching them about the simple fun of a game of basketball.

Horror – “Sound from the Deep” (Finland), a film in the tradition of H.P. Lovecraft about an international research group searching for natural gas and oil aboard a ship in the Arctic Ocean and stirring up a monster they wish they hadn’t awakened.

Romance/Drama/Comedy HM – “The Timekeeper” (Ireland) about a shy clock shop owner trying to come up with the courage to ask a friendly barmaid out on a date.

Comedy – “Rag Dolls” (Minnesota) about a little girl playing with dolls that causes a couple outside to make all manner of funny movements like a humorous voodoo doll. HM – “Lew’s Up First” about a man who doesn’t know technical lingo attempting to order a computer from a saleswoman. The movie is in the spirit of Abbott and Costello’s “Who’s On First” such as when the saleswoman says “Mac?” to ask him what kind of computer he wants and he replies, “No, (my name is) Lew.”

The actor who portrayed Lew, Phillip E. Walker, attended the festival and led Saturday morning’s actor’s workshop at the Big Horn Federal community room. There, he told students to work hard and study theater in college, urging them to go as far as earning a Master of Fine Arts degree so they understand all aspects of the film industry. If students learn the ropes, work and study hard and “show up and shut up” when responding to a casting call, Walker said, an actor can find work daily in Hollywood.

During the post-festival Q&A Saturday afternoon, Walker said his mother told him he was “acting from the womb,” but he said he first truly understood the power of acting when he was asked to deliver Martin Luther King’s “I Have a Dream” speech in class and saw the reaction from his classmates.

“I could see that the speech had an effect on everyone,” he said. “Telling and making stories available to society is the most powerful thing we can do. You can change people’s lives with this.”