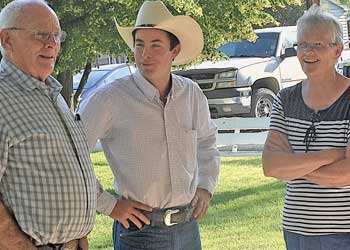 Republican candidates running for positions ranging from county commissioner to state representative spoke at a meet and greet July 10 in Cowley.

State Representative Jamie Flitner spoke at the event, while Sen. Ray Peterson and his challenger for the Wyoming Senate RJ Kost also made an appearance.  Tim Morrison, out of Meteetse, advocated for a position in the state house for District 28.

Several commission candidates did not appear at the event. Clayton Draggoo of Basin, Nick Lewis of Lovell, Joe Wildman of Manderson and Fred Willert of Basin did not speak. Tim Patrick of Manderson was also unable to make the event due to his engagement with the wildfire in southern Big Horn County. Lipp’s challenger, Lisa Delucci of Greybull, failed to make an appearance.

The youngest of the group running for county commissioner were the first to speak. Jolley said that although he is only 22, one should not doubt his dedication to service nor his ability to make a difference for Big Horn County.

“I may not (have a long) resume, but I have the desire and the knowledge,” Jolley said.

Banks, also in his early 20s, said it is time for his generation to advocate for the future they want. As a principled conservative, Banks said he believes he can bridge the gap between those who desire change and those who want to continue tradition.

“I stand right in the middle. I think we need big growth, because we need our jobs, but we don’t want to be Cody or Sheridan,” Banks said.

More importantly, Banks said, he is eager to advocate for Big Horn County.

“My pickup is fueled up for Cody,” Banks said. “(I’m going) to go down and get a voice heard for our communities.”

Carrizales said he’s running again to continue the work he’s started in his current term. He’s not running on being popular, Carrizales said, but on being honest and making the best decisions for the county.

“The decisions aren’t always easy, and they aren’t always what you want,” Carrizales said. “But I have done as I’ve promised, I’ve stayed honest and I’ve kept my integrity.”

Kimsey said that her run for commissioner is spurred on by the need for Big Horn County to come together to face future challenges.

“I see a lot of challenges coming to Big Horn County,” Kimsey said. “I want to see a sense of unity. I want to see us have a seat at the table in Cody and Sheridan because we have to.”

Neves ran on a platform of fiscal conservative and fairness.

“I will be fiscally responsible and conservative with the budget and equitable to departments who have a budget,” Neves said.

Harp said her priority, as a commissioner will be to encourage growth across the entirety of Big Horn County.

“If positive things happen in one community that happens to every community,” Harp said.

Grant said his previous experience as a commissioner will allow him to create progress for Big Horn County.

“When you lobby for something, when they see your face, when they know you, that’s when you can be successful,” Grant said, citing the $20 million he’s earned in grant money for Big Horn County in the past.

Lipp cited her experience in office as district court clerk as being a crucial reason to vote for her. The office is moving to paperless filing Lipp said and the transition into digital will need someone experienced at the helm for it to go smoothly.

More importantly, Lipp said, she has the work ethic to make a difference.

“If you’ve seen how many signs I have all over the county, you’ll know what kind of work ethic my family has,” Lipp said.

Peterson leaned on his connection to Wyoming to appeal to voters to support his way back to the Senate.

Kost said he would have a greater focus on the funding of education if he was elected to the senate.

“I can honestly say my real platform is that I’m devoted to education and our kids, because out of all our resources, they are the most important,” Kost said.

Flitner, who is running unopposed, also said education funding will be one of her primary focuses in the next term.

“I will continue to find ideas on how to solve our education problem,” Flitner said.

The primary election will be held on August 21.