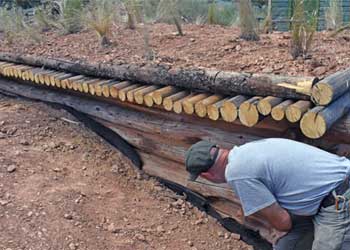 Caroline Lockhart’s Ranch, located within the Bighorn Canyon National Recreation Area, is looking a little more like it did in 1926 thanks to several renovations by maintenance staff and Youth Conservation Corps workers.

It’s one of several projects that have been pursued this summer within the recreation area. Horseshoe Bend, a popular swimming destination, now offers more than just time out on the beach, with  horseshoe pits and a volleyball court added to the area. The boat docks are also scheduled to undergo extensive renovations.

The brunt of the work on The Lockhart Ranch has been done on the generator shed, the first cabin visitors will find themselves approaching while on the trail. Maintenance supervisors Bill Pickett and Mike McArthur have been heading the operation, and have largely rebuilt the structure from the ground up.

“It’s quite the project,” Pickett said.

First, the dirt around the structure was excavated. Then the building was raised up, allowing the crew to remove the logs and more importantly the rot at the building’s base. New chinking has been applied to the outer walls, as well as several logs being replaced. The sod roof has been completely redone.

It’s been worked on throughout the spring and summer, but the majority of the work has been accomplished throughout the last two months, McArthur said.

“It’s a lot of man-hours in a short period of time,” McArthur said.

The cabin, which is planned to be completed by the end of the summer, still has some work to undergo. The floor is only halfway done, and new doors have yet to be hung.

Previous records have been studied, according to Pickett, to ensure the cabin is being restored with entirely historically accurate materials. Building the structure just as Caroline Lockhart did when she moved to the area is a chance to cherish and appreciate history, Pickett said. Since the Ewing-Snell Ranch cabin burned down in December of 2015, that’s been something not to take for granted.

“One day we’re working on Ewing-Snell, and all of a sudden it’s gone,” Picket said.  “So, just being a part of it, making this last, that’s where I find the meaning in this work.”

Tearing apart an old building has plenty of surprises. The pair have found ammo cartridges, old buttons, remnants of old shirts and newspaper scraps from 1903. Most significantly, in between the walls, they found a collection of nine pairs of old shoes.

“It was my supposition that the cowboys got mad at her, so they got a pair of shoes and they threw them in there,” McArthur said.

The Main House and the Main Cabin are scheduled to be worked on in the upcoming years, and the bridge planks in the area will also be replaced. But other areas have been touched up throughout the several ranches in the area.

Youth Conservation Corps worker Natalia Jolley said her and her crew have added logjam to several cabins, built a bridge, painted picnic tables, replanted grass on sod roofs, and have mowed the grass on multiple ranches throughout the summer.

Jolley has lived in Lovell her entire life, but this job has allowed her to see a part of the area she’s never experienced before.

“I hadn’t even been out here until now,” Jolley said. “We’ve been to a lot of different ranches, and our boss Bill Pickett shows us around and tells us a bunch of things that have happened in the past. It’s really cool.”

While Lockhart Ranch is being brought to its former glory, work on Horseshoe Bend is aiming to bring a whole new look to the area.

Work from the Lovell Eagle Scouts has added a new volleyball court, horseshoe pit, and gaga pit to the area. A gaga pit is used for a game called gaga ball, a form of dodge ball played in an octagonal arena.

The recreation area’s partnership with the Eagle Scouts has allowed projects that may have not been pursued to be brought to fruition, according
to maintenance worker Kaleb Leithead.

“It would all be dragged out if it was all of us alone trying to do this. It just helps the community in general,” Leithead said. “There’s more things to do out here. It helps people enjoy themselves more.”

More projects are also being pursued at the Horseshoe Bend. Shaded seating areas will be added to the handicap ramp by mid-August, according to Leithead. Meanwhile, work on the docks, at both Horseshoe Bend and Barry’s Landing has been funded and approved. The old wood on the docks will be replaced with a newer material less susceptible to rotting. That will be completed within the next two summers.

Remodeling inside the marina, meanwhile, has been finished, with new paint and flooring added.