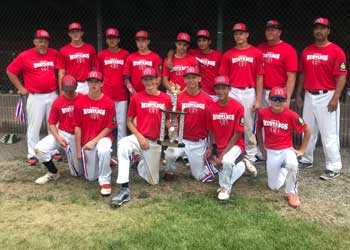 The Lovell Mustangs American Legion C baseball squad put together a successful run at the Wyoming C State Tournament by sending five teams home in the consolation bracket after losing their first round game, making it all the way to the championship game.

The Mustangs fell to Laramie 7-5 on July 17 in the first round of the tournament. Branson Robison, Tyson Christiansen and Carlos Rodriguez led Lovell with two hits each. Cason James led the team with two RBIs.

“It just came down to we had too many errors,” coach Kelly Spann said. “We had chances to put points up but never could get that big hit. Three times we had bases loaded and only put up five runs. CJ pitched a great game, only giving up five hits. I told the boys after the game that we didn’t lose that game, we gave it to Laramie.”

With the loss, the Mustangs faced Casper Wednesday evening, July 18, in an elimination game. Lovell defeated Casper 14-4 to stay alive in the tournament.

“We faced them in the Powell Tournament earlier this year so we kind of knew what to expect,” Spann said. “First inning we started off with two quick outs, then the wheels started to shake. With an error, a walk, then a beaned batter, I thought we were in trouble, but they settled down and got the third out.

“When we came in to bat I told the kids we had to jump on them and not to look back. They responded by putting up four runs. Cale did a good job settling in and pitching. He gave us four good innings, then Irving Castro came in and cleaned up.”

Rodriguez and Christiansen rapped two hits apiece to lead the Mustangs. James, Christiansen and Irving Castro each had an RBI in the game.

“Dallen did just what we wanted as he kept them off the bases for the first three innings,” Spann said. “They had a bunch of fast kids that liked to steal bases. Cason set the tone by throwing out their first baserunner trying to steal second. The kid had 42 stolen bases and had never been thrown out till he met up with Cason’s arm. We had to take Dallen out due to pitch count so we could use him later. Carlos relieved him and finally Avery finished things. We played a good defensive game, I thought. We only had two errors and gave up only two hits.”

Pickett and Rodriguez led the team with two hits apiece. Pickett and Mangus led the Mustangs with two RBIs apiece.

“Nate pitched a great game for us,” Spann said. “We needed him to give us innings and he did just that. We told the team we needed to ten-run teams so we would have pitching later because we had four games in two days.

“We played another great defensive game. We had no errors. I can’t remember seeing a Mustang team have no errors. In the bottom of the fifth we came in and I told the boys it was time to turn it up and put our foot on their necks till no bubbles came up. They came out and put up 10 to end it.

“At this point people started asking ‘Where is Lovell?’”

In the Friday evening game, Lovell took care of Wheatland 16-1 to advance to the consolation semifinals.

“We won the coin flip but chose away,” Spann said. “I told the boys we are going to jump on them right from the start and end it in five. They came out putting up five runs. Avery was on the hill and the guys behind him did the job. Once again there was no errors. Other coaches and fans started talking about what a great bunch of kids we have. They were playing some great ball on both sides of the plate. Wheatland would put runners on, but we would find a way to get out of the inning.”

Saturday, the ‘Stangs defeated Gillette 6-3 to advance to the championship game.

“By this time the team was having fun and was on a roll,” Spann said. “We had sent four teams home and ten-runned them all. We went with Irving again on the mound and left our defense as is. Irving pitched three good innings for us, only giving up two runs. CJ came up first in the second inning and hit a one-hop triple to the fence that got us rolling for the runs. We relieved Irving in the fourth with Dallen.

“Gillette started the fifth with a hit, but the next batter hit a line drive to Satchel (Ginest) at first for an easy double play. Then Dallen had trouble finding the strike zone. They put up a run on three walks and one hit. I knew Dallen could overpower them, so we went at them right down the pipe with fastballs.

“Tyson came up first in the fifth and hit a shot off the fence but only got a double. Everyone thought it was out. Once again we had no errors, but this game took its toll on us as we had to play all seven innings to get the win. The boys were running out of gas and I could see it.”

In the championship game Saturday, the Mustangs’ run through the tournament came to a stop as they fell to Cheyenne 9-3 to finish second.

“I was on cloud nine as a coach. We were in the championship game,” Spann said. “We had Carlos on the mound, bats rolling, defense playing error free ball. We got to bat first and that’s what I wanted. I knew if we could get on top and keep the momentum going they would stay energized. Carlos came up second and hit it to right. The kid dove, missed out and Carlos got an inside-the-park home run. That’s just what we needed.

“Carlos pitched four solid innings but started to tire in the fifth so we went to Branson. We also had to sub out Cason in the fifth as he was getting lightheaded from the heat. Cheyenne put up four runs in the fifth, then five in the sixth. The kids ran out of gas. They didn’t quit as they put up two runs in the last inning.”

With the second-place finish, the Mustangs C squad finished the season 23-4-1.

“If we could have made it to Sunday, we would have beaten them,” Spann said. We had CJ back on the mound and would have been rested up. We were a better team than them but had just played too many games. I truly believe we would’ve beat them if we played them on Sunday and I think that coach from Cheyenne knew that.

“What a great group of kids. These boys will be challenging for the state title down the road, and you can count on that.”

Spann said the Mustangs scored 66 runs at the state tournament and only gave up 26. Spann said the team had a batting average of .310 and the pitching staff had an ERA of 2.27.

“We had in my mind the best infield at the tournament,” Spann said. “With CJ at third, Carlos at shortstop, William at second and Tyson at first, we were solid. I think we turned a couple double plays.”