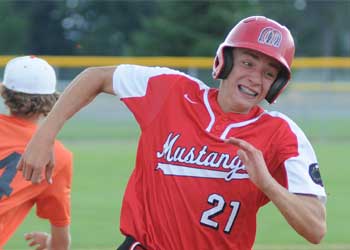 The Lovell Mustangs took a lickin’ from Cody last week but rebounded to edge Powell in a key conference game Monday that has all but secured second place in the Class A West standings.

Cody blasted Lovell 18-4 last Thursday, July 5, in Cowley, but the Mustangs improved to 6-2 in the standings by edging the Powell Pioneers 10-8 in a thriller Monday evening at Ed Lynn Field in Powell. Lovell won the non-conference nightcap 21-4.

The conference game Monday was a nail-biter as both teams played hard and played well, but the Mustangs made the key plays both offensively and defensively down the stretch to win.

“Powell is a much improved team; they’ve played good baseball the last week or two,” Lovell manager Michael Jameson said. “They beat Green River and Casper in conference games. Joe (Cates) and Tyler (England) have done a good job with that team. They’re getting them to play good baseball.”

Powell starter Riley Meyer was tough early and blanked the Mustangs in each of the first two innings. Meanwhile, the Pioneers scored one run in the both first and second innings against Lovell starter Juan Rivera to lead 2-0.

Seeing Meyer for the second time, the Lovell bats began to connect and the Mustangs scored five runs in the top of the third and two more in the fourth to lead 7-2.

“That’s kind of been one of our weaknesses, starting slow, but the second time through the lineup, after seeing him once, things started to click,” Jameson said.

In the fourth, Riley Hill’s two-run double put the Mustangs up 7-2, but the lead was short lived. Powell put together a four-run bottom of the fourth to cut the Lovell lead to 7-6 on the strength of four hits plus a Lovell error and a passed ball.

Powell knotted the score 7-7 with a run in the fifth as Rivera gave way to reliever Brock Hill, but Schneider ripped a two-run home run to left field in the top of the sixth to put Lovell up 9-7. Powell scored a run in the bottom of the frame to trim the lead to one at 9-8, but Hill got out of the inning with the lead.

Will Lillard tripled and scored on a grounder by Kaleb Snyder to give Lovell an insurance run in the top of the seventh, and Hill blanked the Pioneers the rest of the way to pick up the win for the Mustangs. In the bottom of the ninth, shortstop Ethan Price let one get through his legs but later made a spectacular play to end the game, jumping to snare a one-out liner and stepping on second to double off the Powell runner for a bang-bang game-winning play.

“With the tying run on first Ethan made the spectacular play,” Jameson said. “He jumped pretty high to get that one.”

Rivera pitched 4 1/3 innings, allowing seven runs, four earned, on 10 hits and a walk, with two strikeouts. Brock Hill allowed one hit and one run in 4 2/3 innings of work, fanning three.

“Brock came in and was sharp,” Jameson said. “Regardless of the situation, he’s ready to come in and shut the door.”

Schneider finished the game 2-5 at the plate with the two-run homer and four runs batted in. Riley Hill was 2-4 with three RBIs. Lillard was 3-5, Wyatt Horrocks 2-4, each with a triple as Lovell banged out 12 hits.

“It seems like they always play well against us,” Jameson said of the Pioneers. “They’re always competitive and never lay over and quit. They’re a team you definitely don’t want to take for granted.”

The Lovell bats made mincemeat of Powell pitching in the second, non-conference game Monday as they plated six runs in the first, seven in the second and eight in the fourth to lead 21-0 before winning 21-4. Riley Hill got the start on the mound and pitched one scoreless inning. CJ Pickett pitched two scoreless frames to pick up the win, and Ethan Hessenthaler and Kaleb Snyder pitched the fourth.

Lovell had 16 hits in four innings. Dallen Mangus was 3-4 with two doubles and two RBIs, Pickett 2-3 with a double and two RBIs, Snyder 2-2 with on run batted in. Price was 2-2 with two RBIs and a triple. Lillard ripped a three-run triple, Jess Wambeke a three-run double.

“It was nice to see us come out and hit the ball, one through nine,” Jameson said, noting that the Mustangs scored 21 runs on 21 RBIs.

The Mustangs weren’t sharp in an 18-4 loss to Cody Thursday, Jameson said. The game was competitive after three innings, with Cody up 4-2, but the Cubs plated four more in the top of the fourth to chase Lovell starter Riley Hill and lead 8-2, then added a pair in the fifth off Wambeke to make it 10-2. Lovell scored two in the bottom of the fifth to stay within striking distance at 10-4, but the wheels fell off in the seventh as Cody scored eight runs against Wambeke, Pickett and Mangus.

Zack Keisel was the top hitter for the ‘Stangs, going 3-3 with a walk and one RBI. Ethan Price drove in two for the Mustangs.

“We didn’t make a lot of plays behind him (Riley Hill),” Jameson said, “and we did some uncharacteristic things like missing cuts and throwing to the wrong base, giving them opportunities for extra runs. You can’t afford to give them extra outs. It was just one of those days.”

Jameson said coaches told the team to move on from the bad outing.

“We’ve been playing good baseball, and we told them not to let one bad game change the way we’ve been playing,” he said. “We said we’re still in a good position to have an automatic bid to State (top two in the conference).”

The Mustangs will be in Billings Thursday through Sunday for the 2018 Stanaway Wood Bat Tournament, opening up against Powell today (Thursday) at 3:30 p.m. at the Billings Halos Field west of Billings. As a member of the National Division, the Mustangs will also play the host Halos Friday at 6:15 p.m. and the Sheridan Jets Saturday at 10 a.m. before bracket play on Sunday.

With Jackson cancelling out of the tournament, the Mustangs are also supplying a B/split squad team for the tourney. That “second” team will play a Halos split squad team Thursday at 12:45 p.m. and the Halos primary team Friday, also at 12:45, with both games at Musburger Field in Billings.

The Mustangs will host Green River for a nine-inning conference game next Wednesday, July 18, at 2 p.m., then travel to Casper to face the Drillers in the final conference contest Friday, July 20, at 4 p.m.

Lovell will host the district tournament at the Cowley Legion Field on July 26-28.