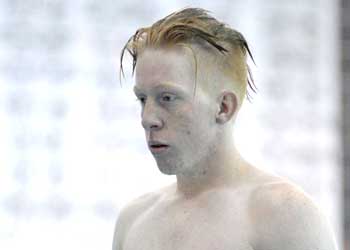 spot on the PHS Hall of Fame board.

Wilkerson said he will be majoring in kinesiology and sports management, criminal justice or biology. He is very excited to be competing at a Division I swimming program.

“It’s definitely awesome,” Wilkerson said. “That was my whole goal for my four years at high school — to compete in diving at the collegiate level. It’s a lot better making it to division one than division two or three.”

Wilkerson knows the competition will be tough at the collegiate level, but he is ready for the road ahead of him under the tutelage of South Dakota diving coach Kris Jorgensen.

“I’m definitely willing to work at it and put in the extra time to meet his expectations,” Wilkerson said.

Wilkerson wants to say thanks to his parents and coaches for helping him get to where he is now in the sport of diving.

“I am very pleased that Hudson is continuing on with his diving,” Warren said. “I didn’t necessarily care which school he went to. I just wanted to see him continue to dive. He is very talented and one of the hardest working divers I have ever coached. He has a talent and that talent needs to be seen by other schools.

“Hudson has worked very hard to get to where he is today, and I am very proud of him. I look forward to following him as much as I can from home. I can’t wait to see what the future holds for him.”

Jorgensen said he is excited to have Hudson on the team.

“I see great potential in him,” Jorgensen said. “He is a great student and diver. I am excited to see him reach his potential at USD in both academics and athletics. He brings a lot of talent and athleticism to our program. Combining that with our team of nine divers next season I think will be a winning combination. He will be able to push the other eight athletes and he will be pushed by them. I believe we will see great things from him in the next four years.”