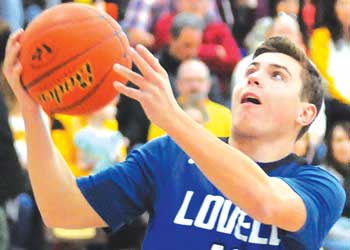 Voted the 2A Northwest Conference Player of the Year and an all-conference and all-state selection, Wolvington, the son of Dan and Melissa Wolvington, was the second-leading scorer on the Lovell team, averaging 13.2 points a game. He shot 52 percent from inside the arc and 37 percent from three-point land. He shot 67 percent from the free-throw line. He led the team in assists with 93, averaging 4.2 a game, and he was the fourth-leading rebounder on the team, gathering 3.4 caroms a game.

“It feels very gratifying,” Wolvington said of being selected. “All that hard work is really paying off. It was nice of Rocky Mountain High School to allow me to use their gym for practice.”

Wolvington said he will be playing point guard or shooting guard in the game. He also said during the week there will be team bonding days and a banquet to honor the players and coaches selected.

“I would like to thank my parents and coaches for the support and pushing me throughout the years,” he said.

Wolvington said his top goal this season was to be voted player of the year in the conference.

Wolvington will be attending Northwest College this fall, then will serve a mission for the Church of Jesus Christ of Latter-day Saints.

Big Horn County girls that were selected to play for the North all-star girls basketball team were Ky Sorensen of Greybull and Jaci Christiansen of Burlington.

There were no local girls selected for the North all-star volleyball team this year.

The players and coaches selected for the all-star weekend started practices Wednesday in preparation for the games.