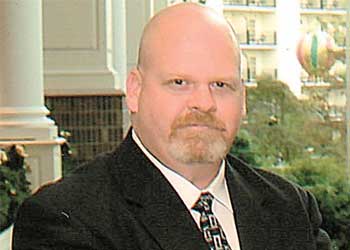 A dedication to the craft and an unshakable belief in his local lodge has led to a high honor for a local master mason.

Bryan Baird of Cowley was recently presented with the Ewing T. Kerr Award as Wyoming Mason of the

The award was presented at the grand communication of the Grand Lodge of Wyoming August 13 in Gillette by ‘17-18 Most Worshipful Grand Master Mark Young.

Baird sat in the east as master of Tri-Mountain View Lodge No. 35 in Lovell during the 2016-17 and ’17-18 years, presiding over a period of unparalleled growth for the lodge.

The lodge raised nine master masons during that two-year period under Baird’s watch and averaged about one degree – entered apprentice, fellowcraft and/or master mason – per month.

Young talked about the progress the Lovell lodge has made in recent years, from proper ritual work to membership growth, when he presented the award to Baird.

Baird said the lodge had experienced some difficulties a few years ago and it had been his goal when he took the master’s chair to “put past difficulties behind us and see what we can do as a lodge.”

“I also wanted to see the lodge take its place in the community, a place that it should hold as other lodges have held across the country,” Baird said. “I look at the faces on the wall (photos of past masters) in the lodge room and knew many of them growing up – and didn’t know they were masons. They are people who did things in their community and helped build it.

“We’re this town’s lodge and should be doing things to make it better.”

Tri-Mountain View sponsored the community play “A Christmas Carol” last fall with Baird penning the script for the local stage play based on the Dickens story. He said his goal was to “bring the community together and give us an opportunity to work together as a lodge out in the community.”

The lodge also organized the parade of lights for the Main Street Mingle in November of last year, as well as the Rose Parade during Mustang Days.

“I hope we continue to do some of those things in the future,” he said, though he no longer presides in the east.

Baird said he views his honor as the lodge’s honor.

“We’re on the radar in the state of Wyoming because of our efforts, and we should be,” he said. “It’s a huge honor, obviously, but I know I didn’t do this by myself. (It was also) our members and the neighboring lodges who helped throughout the years when we were struggling.

“I hope the lodge will continue to carry this forward.”

Baird said it was a special honor to receive the award as fellow lodge member Ken Badget of Cowley was installed as Most Worshipful Grand Master of Wyoming.

“That’s huge, the award being given as we kick off this year with Ken as grand master and as we celebrate our centennial as a lodge. That sequence of events is huge for us as individuals and for the lodge as a whole.

“Ken is the first grand master from our lodge.”