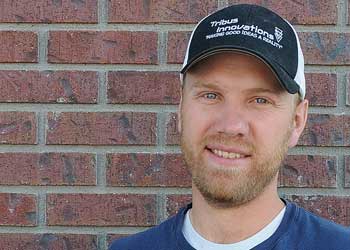 From concept to reality, Tommy Mills and his partners are living the American dream as they promote their new product: a 360-degree ratcheting flare nut wrench.

Mills, who grew up near Wright and now lives in Deaver with his family, came up with the idea for the wrench while working as a mechanic and was surprised that the tool literally didn’t exist. Mills saw the need and developed the concept, and with partners Kendall Bertagnole and Jay Ayala at his side brought the new product to reality through the partners’ company, Tribus Enterprises, Inc.

The trio is in the process of taking the company public, and application for shares to be traded on the OTCQB market will soon be made. After the partners initially raised seed money, the company is now in its first registered offering. For more information see https://tribususa.com.

It’s been a 14-year journey for Mills, who describes himself as a simple-minded ranch kid.

It all began when Mills was working for Wright Lube and Repair, having graduated from the Laramie County Community College diesel tech program in 2004.

“Necessity is the mother of all inventions,” he said. “I needed a wrench and searched exhaustively through tool catalogues, on the Internet and even talking to tool truck drivers. Everybody said it didn’t exist. There were versions of it, but they didn’t allow the access I had in my mind.”

While working for the repair shop, Mills was working on a vehicle and needed to access a certain transmission coolant line.

“If you don’t have the right tool, you do what any ranch kid would do. You improvise,” he said. “And when you improvise, it sometimes it leads to disaster…I used a pair of pliers. I got it off, but the fastener was no longer usable. I got a butt chewing so bad because I used the wrong tool and ruined the line. My boss had to pay for it.

“So the next time the tool man came along, I asked for a set of ratcheting flare nut wrenches, and he looked at me like a dog hearing a high-pitched whistle. He turned his head and said there’s nothing like that out there. It doesn’t exist.”

“I didn’t believe him (the tool salesman),” he said. “Surely somebody makes one, I thought. Again, there were versions, but I couldn’t find exactly what I knew it needed to be.”

Mills went on with life, but he always had his vision of the wrench in his mind. Later, he was operating his own repair shop on the family ranch and he did it again. He was working on the same pickup for the same customer as before, and again, he ruined the transmission coolant line. Only this time he had to pay for the broken part himself – and it “wasn’t cheap,” he said.

“That was the straw that broke the camel’s back,” he said. “I got so mad I threw the pliers across the shop. I could show you the holes in the insulation today.”

Mills continued to think and talk about the nonexistent wrench, and one day his dad asked him to help hook a pickup onto a gooseneck trailer, and there in the back of the pickup was a B&W hitch with a turnover ball.

“A light bulb went on,” Mills said, realizing that someone had to invent the specialized device. So he Googled B&W and put in a call to Roger Baker, one of the company founders, to ask him about the patent process, and to his surprise, Baker took the call.

“There’s no reason I should have been able to talk to the founder of a multimillion-dollar company, so I acknowledge God’s hand in all of this,” Mills said.

Baker asked him two questions: 1) Would you buy your product; and 2) Would anybody else buy it? Mills’ answer: Any mechanic worth his salt would own a set. Replied Baker, “You’ve waited too much time already. Others have probably thought of it, too. But you may be the first one to take action. You can do this if you find the right people.”

“That’s where I feel God turned me down the right path to do this,” Mills said. “He put people in place to propel this to the next level.”

Growing up near Wright, Mills didn’t know Kendall Bertagnole, but he knew his dad, Karl, a successful businessman and rancher. Karl asked Mills if he would clean up a farm he had purchased near Manderson and get it back into operation. Mills accepted and moved across the Big Horns in August of 2013 to take the job. He had worked for the businessman in the Powder River Basin coal bed methane field as a subcontractor after running the repair shop on the family ranch, but he was happy to return to his roots and take on the task of handling the Manderson farm.

The first time Mills met Kendall Bertagnole, the two were part of a group of young men who took Kendall’s sister’s fiancé on a skeet and trap shooting excursion near Buffalo. Mills sat next to Kendall while he drove and others in the party slept, and during that trip he discovered that Kendall was a project manager for an electrical company in Casper, using computer aided drafting to draft blueprints

and make sure electrical, plumbing and HVAC systems worked together.

“The idea of the wrench popped into my head, and I said I needed CAD expertise,” he said. “He was very intrigued.”

The two scribbled out a design on the floor of Mills’ shop and decided, “We can start this process. We can do this. We sat in front of the computer and started the drafting process.”

The duo contacted an attorney about non-disclosure agreements (NDAs) and performed a basic patent search through the University of Wyoming. There were a few designs found but nothing with the technology Mills and Bertagnole had created.

Meanwhile, Bertagnole worked through most of the design process for the wrench but found a particular design feature that he couldn’t master. He reached out, but a Casper College drafting professor said it couldn’t be done.

Bertagnole “didn’t buy it,” Mills said, but then moved to take a new job in Spokane. As the head of a company’s new drafting and design department, he needed some drafting software, and the Autodesk Company sent Jay Ayala to implement the new software. At the end of the process, Ayala asked if there was anything else he could do for Bertagnole.

The wrench “popped into Kendall’s mind,” Mills said, and he asked Ayala if he would sign an NDA and help him with the final design. He said he had to get back to Portland but would get back to him. Two weeks later, he returned to Spokane, signed the NDA and in five minutes had solved the final design conundrum – in a hotel lobby.

“Kendall called me and said, ‘We need this guy on our team,’ and Mills agreed. A three-man partnership was formed. Ayala designed the model on his computer and “what you see today is exactly what was in my mind. Jay brought that to fruition.”

The partners started through the patent process, working with patent attorneys and even Invent Help. The attorneys were “blown away” by the trio’s preparation, Mills said, and the trio hired a firm for the patent process, which proved to be both expensive and slow. Mills called the two-year process “painstakingly slow.” The wrench is still “patent pending,” Mills said, as many products are, with the advice of the patent attorneys the partnership was encourage to begin manufacturing and get the product on the market.

As they looked to take the product to the manufacturing stage, Mills, Bertagnole and Ayala knew they would need outside money, having already spent their own money for the patent process. They created a new corporation called Tribus Enterprises, Inc. with the intention of making it a public company where anyone could invest. It took six months and “a chunk of change” to work through the process with the Securities and Exchange Commission before receiving the company’s notice of effectiveness.

The trio figured they would shoot for an initial $150,000 in seed money to cover the costs, and Mills said his initial reaction was that there was “no way” the trio could do that. But in barely over a month the partners raised $355,000 “based on one plastic model prototype,” he said. Two people put up $100,000 each.

“That really got us going,” Mills said, and on Sept. 20, 2017, Tribus received its notice of effectiveness from the SEC.

Since that time, Tribus has raised a total of $1.7 million through the sale of Common Stock and Class B Preferred Stock and has more than $1 million in manufacturing machinery sitting on a manufacturing floor in Englewood, Ohio, northwest of Dayton, Mills said, with initial production beginning last week.

“We’re very proud of the fact that, what we told investors we would do with their money, we’ve done just that,” he said. “We expect to kick out 2,000 wrench sets per month, but when that will be is difficult to gauge. Because of the explosion of manufacturing in the Rust Belt, it’s hard for us to procure equipment we need to build with. We expect to be selling wrenches by January 2019, if not sooner.”

Mills said he has made many successful sales presentations, from Wyoming Machinery and Cummins Rocky Mountain to smaller shops.

“People are very interested,” he said. “Some say, ‘Man, I thought of that a long time ago.’”

Mills said Tribus has a “very aggressive” digital marketing campaign under way using a firm in Spokane, MDI Marketing, and the company website will soon have a shopping cart to purchase the wrenches.

Noting next week’s investor dinner parties, Mills said, “Our goal is to bring in more investors. We’re very proud that over 50 percent of our investors are from the state of Wyoming. That’s pretty cool to me. We want to be prepared to set up a second manufacturing line (to produce more products).”

While Tribus Enterprises was moving through its various phases, Mills continued to work his “day jobs,” commuting to North Dakota to work in the oil industry, then sheering sheep, which he loves, when the family moved to Deaver in January of 2015. He also worked for Wilson Brothers Construction, but once the wrench company started to gain traction, he said he knew he needed to be “all in” and began fulltime work for Tribus in May of 2017.

Mills lives in Deaver with his wife, Laura, who is the daughter of Mike and Lynn Hansen of Lovell. Tommy and Laura have two children, Tux O’Brien, who is almost 3, and Ramie Lynn, who is nearly a year old.

“God has played a big part in all of this,” Mills said, adding that it is remarkable for a “simple-minded ranch kid” to be able to come up with an invention and help take it to production.

“Only through God could I have this opportunity,” he said. “I hope and pray every day that I make decisions and handle their (investors’) money as well as I would my own. That’s important for all three of us.”

For more information on Tribus Enterprises, go to https://tribususa.com.