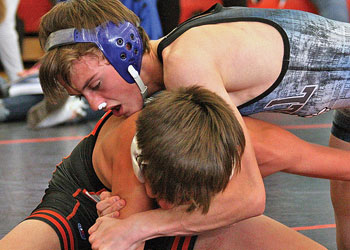 The Lovell Bulldogs wrestling team opened up the new season with a successful showing at the Powell Invitational Friday and Saturday. The team had two second-place grapplers, two third-place finishers, one fifth-place grappler and a sixth-place finisher.

Powell won the meet with 226.5 points, followed by Natrona County with 189 points, Thermopolis with 100 points and Campbell County with 77. Lovell placed fifth overall and second among the smaller schools with 71.5 points, 3.5 points ahead of Cody.

“It’s a really tough tournament,” assistant coach Skye Mickelson said. “To take 10 with us and place six is really good.”

pinned Kaden Tescher of Wright in the quarterfinals Saturday in 1:06. Hecker then defeated Michael Maddox 5-2 in the semifinals before falling to Kyler Henderson of Natrona County 2-1 in overtime.

Sophomore Cardon Mickelson placed second at 106 pounds. Mickelson also went 3-0 in pool action Friday and received a bye in the quarterfinals Saturday. Mickelson defeated Kael Johnson of Natrona County 14-6 in the semifinals before falling to Colt Welsh of Campbell County in the championship match in 2:54.

Senior Alex Nicholson placed third at 120 pounds. Nicholson went 4-0 in pool play Friday and stuck Dalton Leach of Riverton in the quarterfinals Saturday. Nicholson then fell to Brady Stingley of Riverton in the semifinals in 4:48 but bounced back to pin Trevor Feller of Powell in 57 seconds in the third-place match.

Sophomore Asher Nicholson placed third at 132 pounds. He also went 4-0 in Friday’s pool play and defeated Aden Rogge of Livingston, Mont., 8-5 in Saturday’s quarterfinals. Nicholson then fell to Brady Deming of Cody 8-1 in the semifinals but then bounced back and crushed Riley Bennett of Powell 17-2 in the third-place match.

“I think Cardon, Quinton, Alex and Asher showed very well at their first tournament,” coach Nick DeWitt said. “They were energized and ready to go on the mat. They showed a lot of perseverance throughout their matches and were always wrestling to the end.”

Senior Kelly Powell placed fifth at 182 pounds. Powell went 2-2 in Friday’s pool action and fell to Nate Hunt of Cody 7-3 in the quarterfinals Saturday. Powell then beat Aidin Barabos of Thunder Basin 5-3 in the consolation semifinals and Riley Shaffer of Thermopolis 8-5 in the fifth-place match.

Senior Kerry Powell placed sixth at 195 pounds. Powell fell to Tate Clutter of Greybull/Riverside 15-11 Saturday in the quarterfinals. After receiving a bye in the consolation semifinals, Powell fell to Chance Watt of Thermopolis 13-2 in the fifth-place match.

“It was good to see them finish in the top six,” DeWitt said. “At times they showed what they are capable of and I look forward to seeing that higher caliber of wrestling come out of them as we continue our season.”

DeWitt was pleased with the performance of his JV wrestlers in Powell. Bulldog grapplers that wrestled JV were freshman Aden Nicholson at 145 pounds, sophomore Myzek McArthur at 160 pounds and freshman Moises Leal at 285 pounds.

“It was good to see our three JV wrestlers all get a win,” DeWitt said. “Myzek stood out on the first day, winning four of his five matches. You could see a true competitor on the mat. With a little more technique he will fit very nicely in our varsity lineup.”

Overall, DeWitt was very proud with his team’s performance in the first tournament of the season.

“I’m very pleased with the outcomes of our first tournament,” the coach said. “We still have a long way to go as far as fine tuning our technique and getting into better conditioning. I take the blame for a few of the losses knowing that I could’ve helped prepare them better by making sure we were better conditioned. Fortunately, that is an easy fix with a group that is determined and dedicated as these young men are.”

The Bulldogs will now travel to Worland to compete in the Battle of the Big Horns that begins Friday at 12:30 p.m. and continues at 8:30 a.m. Saturday.