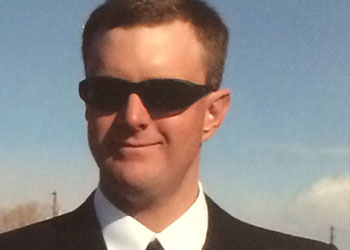 Mark lived in Cowley and went to Cowley Elementary school until moving to Utah with his parents in 1984. He then attended Bennion Junior High School and Taylorsville High School, where he made many good friends, including another brother of heart, Todd Stewart.

He and Todd had many odd jobs together. One job Mark had was a cook in Park City, Utah, where he discovered his love of cooking and appreciation for good food. Mark went on to be a finish carpenter and a superintendent of construction for Jacobson’s Construction. At one time he was the superintendent over four jobs in Denver.
He worked in several states including Alaska, Washington, Colorado, Nevada
and Utah.

Mark also loved helping people. Family members are still finding out how many he did help in all the areas that he lived.

Mark loved the outdoors, especially anything involving riding motorcycles. He spent many weekends at the sand dunes riding. There were only a few people that could beat him up to the top. He loved kickboxing, archery and guns.

Mark is survived by his parents, Louis Jay and Carol Welch; siblings Debra (Craig) Forbush, Louis Gary Welch, Wendell (Heidi) Welch, Nancy (Bert) Nazer, Tracey (Brad) Haskell and Terri (Dusty) Brosious. He has 20 nieces and nephews with 26 great-nieces and -nephews. He was preceded in death by his niece, Wendy Forbush.

Funeral services will be held on Friday, Dec. 14, at 11 a.m. at the Cowley LDS Church. Burial will be in the Cowley Cemetery.