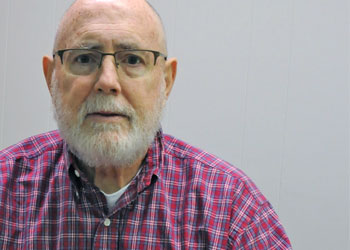 Perhaps it’s how he was raised. Perhaps it’s a reflection of his generation. Or perhaps it’s in his blood. But for retiring Lovell Town Councilman Bruce Wolsey, service to his community is something he has always believed in and practices.

Wolsey attended his final regular meeting as a Lovell town councilman Tuesday night. First elected to the council in 2006, he has completed three four-year terms on the board and earlier this year chose to not seek a fourth.

A 21-year resident of Lovell after moving from Jackson in 1997, he has also served on the Lovell Area Chamber of Commerce board of directors, including two years as president, the Lovell Recreation District board of directors for about 12 years and on the Foster Gulch Golf Association board,

representing the Town of Lovell on all three.

In addition, he has refereed volleyball, served for seven years as bishop of the Lovell Fifth Ward of the Church of Jesus Christ of Latter-day Saints and is a member of American Legion Post 11 after earlier serving as quartermaster for the local VFW post.

Wolsey worked in banking for many years.

“I just like to be involved and help,” he said in an interview Tuesday. “I can’t really say I’m good at it, but at least I’m willing to put out the effort and help where I can.”

He said he’s puzzled by a recent trend of young people not wanting to becoming involved, noting, “What gets me is young men, when they come back from military service, they don’t get involved in the Legion or in other things. How many young people have filed to become a member of the town council? It seems like they’re not as involved as my generation.”

Wolsey said he’s proud of what the town council has accomplished during his years of service including the community center, the electronic sign at the center, finishing the water and sewer infrastructure project, the new water tower, Safe Routes to School projects, the Northeast Little League Baseball complex and the razing of the old hospital to get rid of an eyesore and provide a place for future housing.

As for his council responsibilities, Wolsey said he served as parks and recreation commissioner for eight years and has been over streets and alleys for the past four years. He said he enjoyed working with “the Little League folks” and the town parks workers, and he said the main issue for the streets commissioner is snow removal, noting that the town has implemented some practices to improve the removal, which has also be aided by the removal of the median strip on Main Street.

He also said his background in banking has helped the council make decisions in certain situations.

“I’ve been able to give my input and help,” he said. “We’re talking about other people’s money, so we must be fiscally responsible with it. My banking experience has been helpful, especially around budget time, when we’re trying to spend money but also save money.

For example, he said when the council decided to refinance the bond payments on the water and sewer project, the recommendation was made to make one annual payment, but “I said no,” he recalled, telling the council, “You make monthly payments and you’ll save money because it’s a declining balance. That (decision) will save us $500,000 over a period of time.”

Asked what he will miss the most, Wolsey said he’ll miss being involved and knowing what’s going on in the town firsthand.

Wolsey was born and raised in Provo, Utah, attended BYU and served in the U.S. Army for three years including a year in Vietnam working with microwave transmitters and receivers.

After his marriage to Shanna the couple and their kids lived in Denver for 10 years, Jackson for 16 years and Lovell for 21.

The Wolseys have four children: Tausha Baker of Chubbuck, Idaho, Brett Wolsey of Lovell, Keesha Herren of Cowley and RaeLynne Bangerter of Blackfoot, Idaho. Bruce and Shanna have 23 grandchildren and two great-grandchildren, with a third on the way.