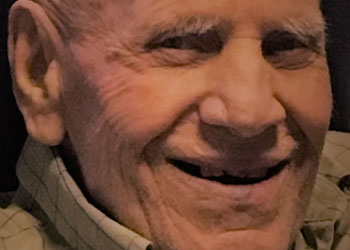 Dwight, the fourth child of Robert Earl and Daphne (Steele) Despain, was born April 26, 1926, in Lovell. Dwight finished three years of high school. It was during World War II, and many young men joined the armed forces as soon as they were old enough. He and his friend Cal Asay joined the Navy in 1944. Dwight received enough military credits at the school in Jacksonville, Fla., to earn his high school diploma. Dwight came back to Lovell in the spring to graduate with his class in May 1945, then returned to finish his two-year commitment to the Navy. He was trained as an electrician and stationed on the USS Trapper.

Dwight grew up during the Depression and learned the value of hard work. As a boy he hauled hay and worked in the beet fields. He delivered a weekly paper and eggs to customers. His chores included housework, helping his mother can, hoeing, weeding the garden and milking and feeding the cows.

Dwight attended Brigham Young University, where he earned a bachelor’s degree in geology in 1950. While attending college, he met and married Sylvia Ann Burrell on Sept. 13, 1948. They were sealed a year later in the Salt Lake Temple.

There were no openings in the geology field at the time of his graduation, so the young couple moved to Lovell, and Dwight planned to temporarily help his father in his plumbing business named City Supply. Dwight and Sylvia soon decided to settle in Lovell permanently. From 1950 until 1966 he worked with his dad. In November 1966, Dwight was appointed postmaster. After retiring from the post office in 1990, he returned to the plumbing business. He would go down to the “shop” a couple of hours most days until he moved to the nursing home in 2017.

Dwight was very supportive of his four children: daughters Ginger, Debra and Tamara and son Dwight Burrell “Bob” Despain. He and Sylvia attended all their activities and programs. Dwight refereed basketball, football and wrestling in surrounding high schools for many years but gave that up when Bob was a senior in high school so he could attend all his games. He enjoyed golfing with his son and tennis with his daughter.

Dwight was a member of the Church of Jesus Christ of Latter-day Saints. He was active in the community. He was a volunteer fireman for 32 years, holding the offices of fire chief and secretary. Dwight served as commander of the American Legion for many years. The governor of Wyoming appointed him to be on the Committee for Fire Prevention and Electrical Safety. He also served as president of the Junior Chamber of Commerce

Dwight had an outgoing personality. He was known for his sense of humor and teasing ways. He especially loved to talk and visit with people who came into City Supply.

The funeral was held at the Lovell Stake Center, Monday, Feb. 11, at 11 a.m. Interment was in the Lovell Cemetery.