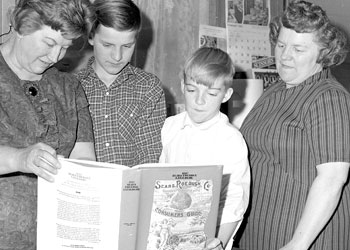 The influenza toll in Wyoming to Jan. 1 totaled approximately 800 deaths, bringing the state’s 1918 death total to 2,913, the highest on record. The births numbered 3,046.

John J. Welch has rented office space in the building formerly occupied by the Big Horn Lumber Company where he is now established with his insurance business. He will also carry a full line of parts for Hudson cars and will be glad to meet all his patrons at his new location.

Pic: “There’s an autoharp just like Grandpa used to have,” Mrs. Denver Mayes and Mrs. Deloy Mayes point out to their sons Neil and Richard as they browse through an 1897 edition of the Sears and Roebuck catalogue now at the Lovell library. In 1897 autoharps cost $16, but now they’re $34, the Mayes noted.

Pic: Stuart E. Morthole (center), recent University of Wyoming graduate from Cheyenne, has been commissioned a second lieutenant in the U.S. Air Force and will soon begin a tour of active military duty. Pinning on his insignia of rank are his mother, Mrs. G.E. Morthole, and his wife Sherry (Spragg), daughter of Mr. and Mrs. Merwin Spragg of Lovell.

It took a month into the New Year for the first baby of 1994 to be born in north Big Horn County. Hilarie Rosemarie George came into the world on Tuesday, Feb. 1, 1994, at 6:11 a.m. Hers was a unique set of circumstances. Her parents, Tom and Susan George, opted to have a home birth.

If he does his job right, he’s barely noticed. If he makes a rough call, he can find himself getting screamed at. He’ll never win any popularity contests, but even with all the ups and downs, he does it for the kids and for the good of the game. Such is the life of a referee, as Joe White of Lovell well knows. White has been patrolling the hardwoods of Wyoming for 35 years, making him the second-longest currently active referee in the state.