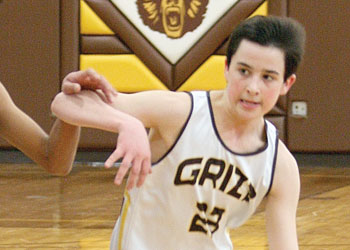 The Rocky Mountain Middle School boys basketball squads tipped off the season by sweeping Ten Sleep Thursday and falling to Lovell Saturday. The Grizz then went 2-1 at Greybull Monday.

Saturday at home, the eighth-grade squad fell to Lovell 45-10. Jackson scored 4 points for Rocky and Johnson, Cooley and Banks added 2 each.

The seventh-grade team fell to Lovell 44-16. May led Rocky with 7 points, and Clendenen and Hedges scored 4 apiece, Jackson 1.

Monday in Greybull, the eighth-grade team fell to Greybull 59-21. Banks scored 6 points, and Cooley and Clendenen added 4 apiece, May 3 and Brandon Abraham and Jackson 2 apiece.

The seventh-grade squad defeated the Buffs 26-7. Clendenen led Rocky with 10 points, and Jackson added 8, Bryce Haslem and May 4 apiece.

The Grizzlies will have another busy week of basketball ahead as they host Meeteetse today (Thursday) at 5 p.m. and Burlington Friday at 2:30 p.m.

Saturday, Rocky will travel to Riverside to face the Rebels at 9 a.m.

Monday, the seventh-grade team will host Powell while the eighth-grade travels to Powell. Both games are scheduled to start at 4:15 p.m. in Powell and Lovell.