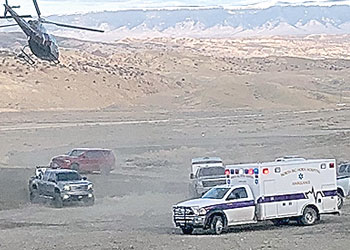 According to Big Horn County Sheriff Ken Blackburn, at around 2 p.m., Derek Riddle, 30, was dirt biking in a steep hilly area, known locally as “The Monsters,” when Riddle hit an obstacle on a descent and was thrown off his dirt bike, landing near the upper end of the cliff in a precarious position and location.

Deputy Darold Newman arrived on scene at 2:15, according to Blackburn, and after making a quick assessment of the scene, recognized that several specialized resources would be needed and began requesting the appropriate parties.

Deputy Jeff Angell arrived on scene shortly after and assumed incident command responsibilities, organizing the upcoming rescue. Riddle was stabilized and somewhat secured on the mountain, according to Blackburn, and complained to deputies of head, neck and back injuries. Angell recognized this indicated potential spinal injuries and immediately called Big Horn Search and Rescue to the scene.

Specialized rope teams, along with general squad members and the Lovell Fire Department quickly arrived on scene. Under the direction of Angell and medical and fire incident managers, a plan was quickly formulated. Senior search and rescue member Jim Thomas led a rope team in rigging the rope that would lower Riddle 500 feet down the hillside.

Riddle was immobilized, secured to the proper rescue sleds and backboards and transported down the mountainside by the efforts of several rope team volunteers. Riddle was lowered without excessive movement and incident, all the while being attended by North Big Horn Hospital medical personnel. It was later discovered that, with his injuries, any excessive movement could have resulted in his death.

Angell had requested a lifeflight helicopter, Guardian Air out of Cody, which landed safely under very adverse dusty conditions at 3:30. Riddle was loaded onto the helicopter, which began its flight back to Cody in under five minutes.

Reports from family members to the Big Horn County Sheriff’s Department indicate that Riddle suffered a cervical spinal fracture in the C5 area, a very critical injury. According to information attained by the department, Riddle had a successful surgery Sunday morning. As of Tuesday morning, it has been reported to the department that Riddle has regained feeling in his fingers and toes.

“This is precisely what we do all the practice for,” Blackburn said. “There is no perfect rescue, but this rescue was nearly flawless. The search and rescue members, the fire department, the ambulance crew members and all other personnel on scene worked seamlessly together for the good of the patient, and we wish the patient a speedy recovery.”