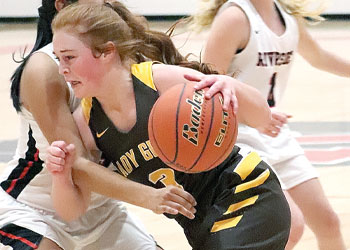 By the time the buzzer sounded on the Lady Grizz’s rivalry matchup with Greybull on Saturday, bones had been fractured and blood had been spilt.

Rocky Mountain limped out of the game victorious, surviving the fray 40-36.

It was the second part of a successful 2-0 start to conference play last weekend, but the win may have come at a heavy cost as the Grizz wait to see if their senior leader Aubrianne Crosby will be able to return to the floor.

It’s the opening chapter of what appears to be an intense upcoming schedule of conference play.

“We talked to the girls and we know every week, every team is going to give us their best shot,” Honeyman said.

Before going to war with Greybull, the Lady Grizz opened conference play Friday against Riverside , who challenged the Lady Grizz with a combination of proficient post-play and an accurate long-range attack.

Rocky Mountain jumped out to a 22-11 lead at the end of the first quarter before the tables were flipped on them, being outscored 20-9 in the second. The two teams entered the locker room tied at 31 apiece.

Freshman scoring guard Victory Buck hit all six three-point attempts against Rocky in the matchup, and when she wasn’t shooting, the Rebels asserted themselves in the paint with Caroline Schlattmann.

“She had probably the best footwork of any post player we played against,” Honeyman said.

Despite their offensive attack, Riverside was never able to separate themselves from Rocky. The Grizz had a weapon of their own in senior guard Teagan Townsend.

“Teagan Townsend was electric. It was a night where I didn’t think she could really miss,” Honeyman said. “Her shooting was just crazy good.”

Townsend went 8 for 11 in the game for 25 points, including five for six from beyond the arc. She was also the Grizzlies’ leading rebounder in the game.

“Every time they would hit a three, Townsend would go down and hit one of her own,” Honeyman said.

In the second half, Rocky’s offensive attack continued, while their defense stepped up.

“I think it was just aggressiveness in the offense. The ball movement is what I really liked. We were running our sets in key moments, we attacked those gaps, had wide open opportunities and we made them,” Honeyman said. “We made key free throws. It’s never easy to win on the road, but for some reason I think our girls love playing on the road. It’s like a second home to them.”

Riverside kept the score tight in a closely contested third quarter but Rocky managed to find a three-point edge, winning the quarter 10-7.

In the fourth quarter, Rocky Mountain took control, outscoring Riverside 17-8, holding the Rebels to only 15 points in the second half. The Grizzlies won the match 58-46 in their second best offensive performance of the season.

“I love that,” Honeyman said, referring to his team’s offensive output. “I love the energy our girls brought. Out transition was a lot better. We were looking to shoot.”

Sophomore Kiara Jolley had 11 points in the game with three rebounds and one steal.

“She hit a huge three. She’s gaining confidence in her jump shot,” Honeyman said. “She’s going to be lethal.”

“Jo Steed is back,” Honeyman said. “She played within the system and shot when she had opportunities.”

Also performing well was Crosby who had  6 points, two rebounds, five assists and two steals and Junior Taylor Despain had 6 points and one steal.

Honeyman said the Lady Grizz had entered Saturday’s game with a mental edge. After losing to Greybull last season and falling to them again twice this volleyball season, his athletes were determined to put Greybull’s win streak against to an end.

“I had a feeling it would be a low scoring quarter,” Honeyman said of the first quarter.  “What Greybull did was they came out and physically handled us. It caused us to withdraw back a little bit. It was a physical game back and forth. It to us time to get back into it.”

Both teams found themselves on opposite sides of a slugfest in the first, with Greybull atop of Rocky 4-3 when the first quarter buzzer sounded.

And then Rocky found momentum. Townsend hit two three-pointers in the second quarter, and Steed hit one of her own. All of a sudden, it was off to the races for the Lady Grizz.

“Our tempo started to get better there. Greybull tried to slow us down and make us work in half court,” Honeyman said. “But we started to cause turnovers with our press. We transitioned better, and we also hit threes.”

Rocky built a 11 point lead going into halftime after a 16-4 second quarter rout.

But Greybull was far from being out of the game and the trials of the Lady Grizz were just beginning.

Rocky kept their edge in a largely even third quarter, increasing their lead by two points with a 13-11 edge, but toward the end of the quarter, the tide started to change.

It started with Crosby, who had to leave the game with a dislocated finger. She would not be able to return to the court and her status as of Wednesday morning is still unknown.

With the senior Grizzly out of the game, Greybull took the opportunity to mount the comeback. Rocky found themselves unable to close the game out, only going three for nine at the line in the final quarter and missing several close range shots.

Greybull on the other hand was finally finding a way to hit their shots, banking in crucial three-point attempts.

To make things more chaotic, junior guard Taylin Boettcher was bleeding all over the court. It was just a scrape to a knuckle, and Honeyman reckons she was gashed by a fingernail, but what resulted was multiple game stoppages throughout the fourth quarter for multiple players to run off the court and change into new uniforms, their original uniforms blood spattered.

It was fretful, but the Grizz managed to hang onto the game despite the obstacles in what turned out to be a 40 to 36 nailbiter.

“I thought our girls had to overcome a lot of adversity in the game,” Honeyman said. “One of our senior leaders was injured, we had to keep subbing them out to change four to five shorts because of blood. And still, we overcame it. They were like ‘we got it.  No big deal.’”

Boettcher had 9 points, three rebounds, two steals and one block.

The difference in the game was found on the defensive side of the ball, where Rocky held Greybull to 26 percent overall shooting and caused 24 turnovers.

This week, the Lady Grizz will continue conference play against Tongue River, the varsity team tipping off on their home court at 5:30 p.m.

The Grizzlies will stay at home on Saturday as they face Big Horn in a non-conference matchup. The tipoff time for that conference game is 1:30 p.m.

It is unclear whether Crosby will be able to take the court for this weekend’s games.

“There is no player in the state who can replace Crosby, but I think Josey Steed will step in. She’s playing really good basketball right now,” Honeyman said. “But it’s going to be tough to replace an Aubrianne Crosby. She’s probably one of the toughest kids I’ve ever coached and chances are, regardless of what the specialist says, she’s going to tape it up and say ‘don’t worry about it, coach.’ If not, our role players are going to have to fill the void.”