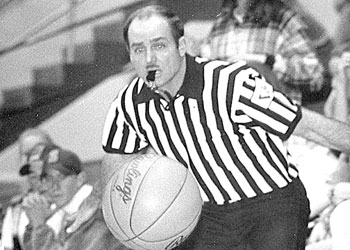 Joe White of Lovell will be inducted into his third hall of fame Saturday when he joins Don Black and John Franckowiak in the Lovell High School Athletic Hall of Fame.

A man known for his tireless dedication to the youth of Wyoming, sports officiating and local volunteerism, Joe White was born in Riverton and grew up in Fremont County and Big Horn County.

White chose RMC and competed in five college sports before his graduation in 1971. He ran track and cross country for four years, played basketball for three years and played baseball for one year, earning 11 letters. He even played in one football game when the team was short of defensive backs.

“I was such an athletics nut growing up,” White said. “I couldn’t wait to get from one sport to the next – high school and college. One reason I officiate is I’m trying to give back to the sports that were so good to me.”

White graduated from RMC in 1971 with a bachelor of arts degree in physical education and a minor in history. He was inducted into the school’s athletic hall of fame in 2016.

After graduation he taught in Volborg, Hysham and Gardiner, Mont., before moving to Midwest, Wyo., in 1974 to start work in the oil patch. It was in Midwest that White first picked up a whistle, and he continued officiating after moving to Powell in 1977 and to Lovell in 1980, and he married Kathy Winterholler in 1981.

He was then hired by Marathon Oil, working in Oregon Basin, the Frannie Field, the Byron Field and eventually the Garland Field. He spent 28 years with Marathon, retiring in 2011.

Since his move to Lovell he has been active in athletics at the local, regional and state level, including serving as a volunteer track coach working with distance runners from 1982-90 and working as the starter for the Lovell track meet for 20 years.

“I think in being an official Joe has done a lot of our events, especially as a starter at our track meet, the Lovell Invitational,” Lovell Athletic Director Joe Koritnik said. “One thing that comes to mind as you watch Joe around athletics is he wants to create the best experience for kids, wants the kids to enjoy their competition. He just truly cares about kids.

“You see him talking to kids after races or during a ballgame. He’s always trying to encourage them or provide them with information to help them. He’s always there for kids, which is what you want.”

White said he does enjoy helping the student athletes, which is why track and field is his favorite sport to officiate.

“There’s a lot of one-on-one with participants (in track),” he said. “I tend to cater toward the athletes that are working very hard but get very little recognition. I do that through sportsmanship awards and cheerleading, giving them positives. Someone may come in with a 68-second quarter, but I give them a pat on the back and tell them I’m proud of them for giving their all.

“I get graduation announcements every year from students from other schools I hardly even know, probably based on what I’ve said or done during  a meet or a game. It’s meaningful knowing you’ve had an influence on young people’s lives.”

Throughout his career, White has been one of just a few officials in the state to officiate four sports: football for 40 years, cross country for 38, basketball 46 years and track, serving 40 years as a starter. He was named the Wyoming Boys Track Official of the Year four times and served as the WSOA representative at the state track meet for 20 years, helping to determine the past 80 state pole vault champions. He was also named the Wyoming Girls Track Official of the Year in 2017.

White served as the Regional Track Meet director for 10 years. He has been a starter at state cross country and state track meets and also officiated a state football championship game. It’s a profession that’s not for everyone, he said.

“You have to be dedicated, for sure, and committed to what you’re doing. You have to look at the big picture as far as how far you want to go in the profession,” White said. “You have to set goals and strive to meet those goals. Bottom line is, I enjoy working with young kids and different officials. After 46-plus years of officiating I couldn’t begin to count the number of partners I’ve had in football and basketball games.

“Nicc Crosby asked me the other night how many games I’ve officiated over the years and it’s probably close to 5,000 basketball games if you count them up, plus 35 to 40 football games a year, times 40.”

White was inducted into the Wyoming Sports Officials Association Hall of Fame in 2017 and was awarded the Ox Zellner Football Officials Career Achievement Award in 2018. He also received the Wyoming Interscholastic Athletic Administrators Association Distinguished Service Award in 2019 for his contributions and dedication to the youth of Wyoming through sports officiating.

He has worked as meet director for a variety of local track meets for more than 30 years and continues to officiate football, basketball, cross country and track in the state and mentor new officials in Lovell.

“One thing that stands out about Joe is that, as a Hall of Fame official, here recently as he’s gotten kind of to the end of his career, he has taken on more of a role – and he always did it to some degree – to really help mentor the other young officials in Lovell,” Koritnik said. “We’re in such dire need of officials nationwide, and here’s an official who not only continues to officiate at 70 years old and is doing a good job but is also mentoring the young officials here in Lovell to help them become better officials and enjoy officiating.

“You’ve got to appreciate that. The lack of officials is going to become dire unless we can get more to officiate. Joe has been proactive in that, trying to help.”

White said he recently received a text from local referee Scott Devore thanking him for being a mentor and always willing to help out.

“Stuff like that makes the mentoring of young officials worthwhile, when they acknowledge the positives in the process,” White said. “I don’t try to throw a whole plate full of stuff at them. I suggest one or two things each game where we can do better. And if I’m being lazy in my mechanics, I want them to let me know during a time out or a break in the action. We can all become better officials by acknowledging constructive criticism.

“I take evaluations seriously. We need to leave our ego in the locker room and go out there and give our best effort to those kids no matter what level of competition it is. They deserve that. People come to see the players, not the officials. You stay in the background as much as you can.”

A lifelong athlete, White was successful in the Big Sky Games and the Wyoming Senior Olympics for many years as a runner. He also has a long record of charitable contributions and volunteerism in the community.

“That’s the neat thing about Joe. He does things he doesn’t have to do because he cares,” Koritnik said. “He wants a top level event. He comes early to our invitational track meet to do what he can to help set up like get the starting blocks in place. He’s very helpful. He comes early and wants to make sure everything is ready and help where he can. You have to admire and appreciate that.”

“I’m a firm believer in community service,” White noted. “Everyone should volunteer time to give back to the community we live in.”

Joe and Kathy White have two children: Jeff of Scottsdale, Ariz., and Lauren Shumway of Lovell.

White said he keeps a book of quotes along with his officiating schedule, and one of his favorite is from legendary UCLA men’s basketball coach John Wooden: “Ability gets you to the top. Character keeps you there.”

Former longtime Burlington coach Jerry Patrick wrote of White, “I have always enjoyed having Joe referee our football and basketball games…The thing I like about Joe is I know I will get a fair game called. I like the way Joe works with the kids. He uses preventative officiating to help kids keep out of trouble. He is professional, precise and confident with every call.”