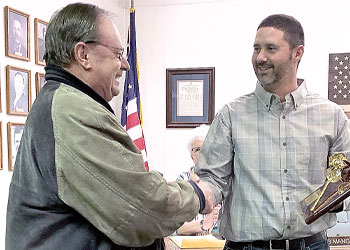 The Lovell Town Council honored a longtime employee with a retirement plaque to kick off the first meeting of the new year Tuesday night.

Mayor Kevin Jones presented the plaque to Rod Allred, who retired December 16 following a 38½-year career with the Town of Lovell.

Allred graduated from Lovell High School in 1977 and after working one campaign at the sugar factory and attending Northwest Community College for one semester, he was called to a two-year mission in Wisconsin. Upon his return, he was hired by the Town of Lovell as a member of the town crew in March of 1981.

After three months on the crew, he moved out to the water plant, working with cousin Ed Allred as a water plant operator. After the plant shut down with the advent of the Shoshone Municipal Pipeline, Allred worked for the last 28 years or so as an equipment operator, meter reader and more.

One thing Allred said always stuck with him was how the town stood by him when he became ill just as he was hired. On his second day of work in 1981 he took ill with mononucleosis. He spent one week in the hospital and another week recuperating at home.

“The job was still open for me,” he said.

Then after he returned to work he was too weak to do very much. He recalls handling 50-pound bags of alum at the water plant and having to rest after each bag.

He said he always appreciated town manager Bob Brandt and foreman Leo Kocherhans for standing by him. He said he also fondly recalls the friends he made on the town crew like Milt Ontiveroz.

“I enjoyed working with him,” Allred said. “He was always happy and friendly. He’ll still drop by the shop from time to time.”

The town also honored Allred with a retirement party on December 13.

The first meeting of a new year always includes some annual duties such as the reading of the disclosure of interest reports for the mayor, council, treasurer and assistant treasure regarding financial institutions the town does business with. The disclosures were read by clerk/treasurer Valerie Beal.

The council then voted to approve the Bank of Lovell, Bighorn Federal and the WYO-STAR state investment pool as official depositories, with First Bank to be named at a later date once paperwork is received. The council also voted to designate the Lovell Chronicle as the official newspaper of the Town of Lovell.

Under old business, town administrator Jed Nebel explained that cost of a new automated external defibrillator for the community swimming pool came in a little higher than expected. The council voted in December to pay a one-third share of the AED, $531, with School District No. Two and the Lovell Recreation District each picking up one-third, as well.

Nebel said he received new information that the town’s share would be $625.42, and the council voted to approve the additional cost.

The AED will be housed in the office at the pool complex.

“We sat down several months ago and went over all of the revisions,” Kitchen told the council. “They have been made (in the manual).”

The council voted to approve the new policy manual.

Nebel also took to the council the annual renewal of a preventative maintenance contract for equipment at the community center with Yellowtail Refrigeration, which performs periodic checks of equipment at the center.

The council voted to approve the contract for an annual fee of $800, payable in two installments of $400 each.

Under petitions and communications, Beal presented the December production summary of the Shoshone Municipal Pipeline, information from the Lovell Area Chamber of Commerce and Lovell Inc., a retirement system update and information on a software proposal from Caselle. Beal and Mayor Jones noted that the new software gives the town a number of new capabilities for handling payments, fines and the like.

In her monthly report, Kitchen said that, although the federal government has passed a law, signed by President Trump in December, to raise the legal minimum age to buy tobacco products from 18 to 21, under the rule of presumption a municipality may not enforce a federal law until the state adopts the law. Thus, police may not issue tickets until the Wyoming Legislature adopts the law.

Councilman Bob Mangus and Mayor Jones concluded the meeting by thanking Nebel for all of the time and hard work he put in writing the Land and Water Conservation Fund grant for the upgrades to Constitution Park.

The council adjourned the 30-minute meeting at 7:30 p.m., and the next regular meeting is scheduled for Tuesday, Feb. 11.