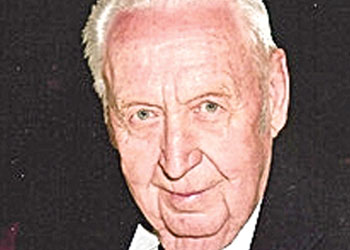 Orville James Boggess went home to be with his Savior and Lord Jan. 12, 2020, after a short illness.

He was born in Flatwillow, Mont., on July 7, 1929, to Viola Clark Boggess and Roy Orville Boggess. He grew up in Montana, attending elementary school in Ryegate and Billings.

He graduated from Billings Senior High in 1947. He served in the United States Army as a radio operator in Korea, working in KMAG, Korean Military Advisory Group. He was awarded the Bronze Star in February 1953.

He met the love of his life, Girtie Lou (Polly) Johnson, while on leave in the San Francisco Bay area. They were married Jan. 24, 1954, at Epiphany Lutheran Church, San Leandro, Calif. They had two daughters and made their home in Lovell.

Orville opened Boggess Construction along with his parents. He continued to own and operate the company until his retirement. He was active in the Land Improvement Contractors of America.

Orville loved his Lord, his family, his country and his cowboy hats. He enjoyed gardening, hunting and fishing. He loved going to the family cabin that he helped build.  Spending time with family brought much joy to him. He talked to both daughters every day when he was not visiting them in person.

He was preceded in death by his parents, Viola and Roy Boggess, and his wife of 54 years, Girtie Lou (Polly) Boggess.

In lieu of flowers, the family requests memorial donations be made to St. John’s Lutheran Church, Lovell, or the charity of your choice.