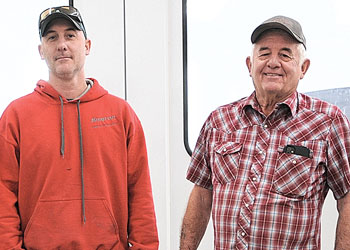 A fixture in the Lovell business community is celebrating its 40th anniversary this year with a new location that has more than doubled the capacity of the former operation.

Gary’s Auto Body relocated from its longtime location on Road 11 southwest of Lovell to 455 Pennsylvania Ave. in Lovell, the site of the former Woodcraft Cabinets and Fixtures business.

Gary Jolley started Gary’s Auto Body in 1980, having worked for Keith Grant at Midway Motors for a few years. Wife Julie did the books, and all of the kids chipped in over the years.

“All of my boys helped me all the way through, the girls, too, for that matter,” Gary said. “They all know how to work, I’ll tell ya.”

The sixth of Gary and Julie’s seven kids, Danny Jolley, now runs Gary’s Auto Body, though Gary is still a part of the operation. Though he has run the business since 2003, he said it feels like it’s always been a part of his life.

“I always liked to play like I ran the business,” he said. “I would even make estimates. Bryan (brother) and I would mess around painting bikes and tinkering.”

“My kids had to build their own vehicles to drive,” Gary added.

Danny admitted he was sometimes more “headache than help” as a kid “helping” his dad in the shop, like the time he helped straighten brand new headlight covers for a Corvette  — with a hammer.

“In my mind they were the old ones,” he said.

Danny Jolley, a two-time state wrestling champion, graduated from Lovell High School in 1999. After a year of welding school at Northwest College, he worked a variety of jobs – Carquest, Bentonite Corp., GK Construction – until the opportunity to take over the family business came along.

“I was at the point where I had to get out of it,” Gary said. “The paint affected my lungs, and I had asthma.”

Danny took the reins of the business on June 1, 2003, and as he took over the shop, Gary and Julie moved to St. George, Utah – briefly.

“We stayed there about seven weeks,” Gary said. “Julie had Pryor Mountain Syndrome (the yearning to come home).”

Gary worked for Minchow’s Service, 4N Trucking and for sons Bryan and Gary Lee, moving to Billings to help with Gary Lee’s hydro-excavating business while
Julie worked for TSA at the Billings Logan Airport.

Later, Danny asked his dad if he would come in and help him a little, because he had gotten a little behind on some jobs.

“He’s been here ever since, about six years,” Danny said, though he noted that Gary still avoids the paint booth.

The original body shop was about 1,200 square feet, a 30 by 40 building. He said the family added on to “try to make it work and have enough room,” and one bay was designated as a paint booth. He installed new lights and a new heat system, but the shop was always limited on space. In the summer, he would even work on cars outside.

“I’d been thinking about a new building out there for a while, and I’d also been looking in town. I searched in town up one side and down the other,” Danny said. “Then the hailstorm hit, and we had so much work we couldn’t keep up. We were up until 7, 8 or 9 at night.”

Danny said he had talked to Jacob Hatch about the Woodcraft building in 2017 but couldn’t come to an agreement at that time. After the July of 2018 hailstorm, he approached Hatch again in August of that year and after some negotiation the two came to an agreement and Danny purchased the building in December of 2018.

Over the next several weeks Danny made a number of upgrades to the building including electrical work, a new heating system, interior paint, a new air compressor and a brand new paint booth that has tremendously reduced the drying time for paint jobs.

“I wanted to go big on the paint booth,” he said. “A standard booth is 26 feet long, and this one is 31 feet. It’s probably the biggest booth in the Big Horn Basin; I almost guarantee it. It has a 1.5 million BTU heater that has sped up our turnaround time by 40 to 50 percent.”

Gary’s Auto Body moved to Pennsylvania Avenue in March of 2019, and while he misses being right next door to his home, Danny said the move to the new building has been great for business.

The original location on Road 11, even with additions, was around 2,200 square feet, Danny said. The new location is 9,550 square feet including 7,700 square feet of shop space. He has more that doubled his capacity and has added two new employees with Brian Crawford and Alex Nicholson.

One of the best things about the greater capacity is the ability to simply get more done, he said, and his eventual goal is to become so efficient that he can spend more time with his family. For instance, he used to be able to do about three to five jobs in a week, and now he can do four to eight. And with the extra space, there can be up to 12 vehicles in the shop at a time, if needed, he said, whereas only three vehicles could fit in the former shop at one time.

Right now, Gary’s Auto Body is operating Monday through Thursday, 8 a.m. to 5 p.m. and Friday 8 to 3, but he would love to operate four days a week.

“We’re grateful to the community for their loyalty,” Danny said. “People have been patient (during the hail repairs). It’s been great. The community has been patient and worked with us and understood.

“We like to think our quality is worth it. We pride ourselves in giving the best results possible. And we can do more in a week here than we could in three weeks at the old shop.”

Also a member of the Lovell School Board, Danny said he appreciates his wife, Tessy, for supporting him and the business through lots of late hours.

“She’s a big part of building the business,” he said.

Danny and Tessy Jolley have three children: Trecelle, 19, who is helping at the business; Kreed, 14; and Shaya, 11.