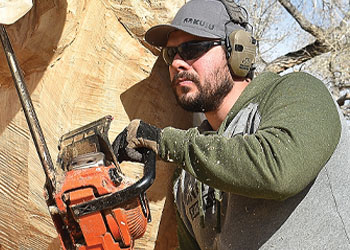 That was the story of a giant cottonwood tree that towered over the property at 285 Crooked Creek road.

Lou Kennedy first arrived on the property in 1999. After a 30-year career in Advertising, Kennedy moved to Wyoming looking to spend the rest of her years dedicated to her true passion – horses. But as she arrived on the property, which currently operates as an equestrian center, a new entity suddenly became the focus of her attention. A cottonwood tree, standing with a circumference of 30 feet.

“That tree was so fabulous – I wanted to build a house that surrounded that tree. I designed the house myself and that tree was a focal point for the house,” Kennedy said. “I came here 20 years ago, and that tree was gorgeous, it was the biggest shade tree in the world and it just got bigger over the next 20 years.”

It was a part of the soul of the place, Kennedy said, but six years ago, it stopped sprouting leaves.

“It was a special thing for me. It tore me up that it died on my watch. It’s been here for a hundred years, and it died while I was in charge of it,” Kennedy said.  “I just couldn’t take that.”

Sometimes, though, things get reborn, too.

After two years of waffling, Kennedy finally made the call to have the tree taken down, but that went nowhere near as planned. The crew left a stump still ten-feet tall after several hours of work. Kennedy said they were exhausted and didn’t want to tackle any more.

And who could blame them? The root system of the tree was massive, it snuck underneath the driveway, nobody would want to touch it.

So a new idea took root in Kennedy’s mind.

Award-winning Alaskan chainsaw carver Jordan Anderson was scrolling through Facebook on Oct. 1 when he received a message from Kennedy.

“I get a lot of requests on my Facebook, so I wasn’t sure how serious she was about getting a job done and then she showed me this monster tree and I was like okay, I hope you know what you’re getting into, because that’s a huge project,” Anderson said.  “There’s a few trees I’ve cut that are close to this size, but this is by far the biggest project I think I’ve done as far as square footage of carvings, as far as height. It is the largest.”

Kennedy contended that very few artists would have the skills to tackle the “monster tree”, but she quickly grew confident that Anderson would be able to. So she paid to have six of his chainsaws shipped to her residence a month before Anderson’s arrival and helped foot the bill for Anderson to fly into Wyoming on Jan. 15.

It wasn’t just that Anderson was capable, he has a way with art, Kennedy said. Most chainsaw carvers make cartoonish pieces. In comparison, Anderson’s work can be incredibly life-like.

“That’s what I saw in his artwork. In all of his artwork there is a flow of energy that is quite obvious, and that’s what makes it beautiful to me. Someone who does it with everything they touch expresses the life in the thing,” Kennedy said, describing Anderson’s work.  “Whatever the life energy of a thing is that makes it beautiful, he somehow has it.  It is delighting in its movement and you can feel that.”

After over three weeks of work, and still days more to go, the cottonwood tree has been transformed into three lunging horses, all jumping out of the stump of the former cotton wood tree, with a horse reading behind them.

Anderson has an extensive history of carving North American animals and can show a pamphlet of all the awards he’s won carving them, but horses were unexplored territory for him and a far trickier endeavor than most of his projects.

Horses are the epitome of a four-legged animal with a muscle structure that is very visible, Anderson said. Fur can help out a carver, giving them more leeway. Muscles are less forgiving. There are very specific lines and structures he had to portray.

By nature, chainsaw carving leaves little room for error. It’s art through reduction. Once you chop off a piece of wood, myriad opportunities are forsaken for the opportunity decided upon.

But, working on a horse ranch, Anderson had more opportunity to observe the real animal as he replicated it in wood.

So, Anderson went to work, measuring everything he could on the real-life counterpart. He measured the size of a horse’s skull, from the back of the ear to the nose. From there he could assume how much of the log he needed for the body, assisted by measurings of joints and muscle groups.

Then came the stump itself, which required some cuts to be nearly eight and a half feet thick.

“The size adds a little bit of challenge because plowing through the log with a chainsaw for a week is going to be taxing on the body,” Anderson said. “As long as I know how the shapes need to go, using that big saw to make those dedicated cuts is pretty much second nature. So the difficulty of the process is figuring out what kind of material is there and what kind of poses you can get away with and from there it’s just a raw material. It just becomes  a big project that requires patience and nerves of steel.”

In a way, there can be no better way to know the nature of a place than by tearing through one of its trees. The meaning of the piece soon became evident.

“Every tree kind of has its own journey,” Anderson said. “You can tell this tree is older than any of us here today. It’s been around the ranch and the horses. The story would be it’s a wild tree, and the story of this piece would be wild to willing.

“It’s kind of all-encompassing, between horses and myself as a chainsaw carver,” Anderson continued. “I could come up to this tree and knock out a bunch of owls and eagles and cool north American wildlife, but for me it kind of tamed me as a carver because I had to exercise a lot of patience in this piece.”

As the sculpture is finalized this week, after three weeks of work on the sculpture, what Kennedy describes at the life-force of the tree has been transformed into a monument to the horses around it.  The ranch has always been centered on horses, but now even the house is, encircling the sculpture in front of it.

“I’m feeling that  now the tree has a new life,” Kennedy said.