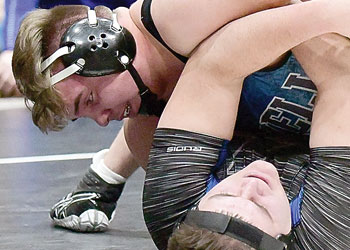 The Lovell Bulldogs wrestling squad competed with schools from around the state at the annual Ron Thon Memorial Friday and Saturday in Riverton.

In individual results, senior Coy Trainor placed second in the 285-pound varsity division. Trainor pinned Alex St. Gelais in 1:48 and defeated Will Baker of Southeast 11-2 in the quarterfinals. He then upset Dalton McInerney of Thunder Basin in the semifinals in 5:34 before falling to Parker Merritt of Star Valley in the championship match in 53 seconds.

“This tournament gave Coy a good look at what true heavyweights are like,” coach Nick DeWitt said. “It was great to come back from the loss to the number one 4A wrestler last week and get a win over him this weekend.”

Senior Quinton Hecker placed fifth in the 126-pound varsity division. Hecker stuck Spencer Howes of Star Valley in 3:20 before falling to Amos Solano of Cheyenne East in 34 seconds. Hecker stormed through the consolation bracket as he pinned Nathaniel Sausedo of Natrona County in 2:24 and defeated RJ Davidson of Rock Springs 13-0, Colter Julian of Kemmerer 2-1 and Spencer Larson of Star Valley 6-3 before falling to Solano again in 38 seconds. In the fifth-place match, Hecker defeated Preston Seamands of Wright 7-3.

“Quinton had a rough draw from not being seeded in the tournament,” DeWitt said. “But even with the difficult draw, he did very well and overall it worked out for us. We were able to meet up and defeat the number one wrestler in 2A and get another win over the number three ranked wrestler in 2A. His only losses were to the same kid who is number one in 4A.”

Junior Cardon Mickelson went 1-2 in the 120-pound varsity division, pinning Nick Cook of Lyman in 3:09 for his lone win in Riverton.

Other Bulldog wrestlers in the varsity division were junior Myzek McArthur at 160 pounds and junior Cruz Garcia at 285 pounds.

The varsity squad placed 22nd in Riverton with 45 points, just one point behind Cody and four points ahead of Thermopolis.

“Those that wrestled in the varsity division were able to compete against some high-quality opponents from upper divisions,” DeWitt said. “It showed them that there is always work that needs to be done, and we can always work harder and improve.”

In the junior varsity division, freshman Zane Collins placed fifth at 170 pounds. Collins pinned Wes Briggs of Riverton in 1:51 and defeated Gage Gipfert of Cheyenne East 4-2 in the quarterfinals before falling to Grayson Beaudrie of Cody in the semifinals in 49 seconds. In the consolation bracket, Collins fell to Jake Sides of Natrona 3-1 and stuck Matt Thompson of Cokeville in the fifth-place match in 4:30.

“Zane had a couple of disappointing losses, but I think he learned from them, and he will be stronger going forward,” assistant coach Skye Mickelson said.

Junior Kyler Marchant went 4-2 at 113 pounds. Marchant pinned Christian Meza of Sheridan in 1:28 before falling to Ethan Reichenberg of Evanston in 1:34. Marchant bounced back in the consolation bracket and stuck AnnaBeth Bornhoft of Riverton in 1:57, Mont Haslem of Kemmerer in 1:04 and Teila Peters of Buffalo in 1:17 before falling to Weston Thomas of Powell in 21 seconds.

Freshman William Spann went 3-2 at 106 pounds. Spann won by injury default over Riley Abramson of Laramie and defeated Sam Byram of Kelly Walsh 10-8 before falling to KC Gibson of Wind River in 2:47. In the consolation round, Spann pinned Gavin Zamzow of Campbell County in 1:20 before falling to Alleynah Ronnau of Cheyenne East 8-7.

Junior Marshall Mickelson went 3-2 at 182 pounds, defeating Trevor Eldridge of Cheyenne East 9-3 and pinning Quinten Williams of Buffalo in 3:47 and Conner Viehweg of Cokeville in 3:21 for his three wins.

Sophomore Carlos Garcia went 2-2 at 160 pounds, pinning Julian Rodriquez of Kelly Walsh in 1:28 and Maggie Smith of Rock Springs in 1:17 for his two wins in Riverton.

Freshman Jordan Allen went 1-2 at 120 pounds, pinning Luke Bjorkland of Natrona in 3:46 for his lone win.

Other Bulldog wrestlers in the JV division were freshman Jadyn Snyder at 113 pounds and freshman Tayton Hodges at 170 pounds.

The JV team placed 19th with 68 points, just one point behind Laramie and two points ahead of Evanston.

“All together, we had 10 kids in,” Mickelson said. “Kyler, Marshall, Aden and Carlos all went out right before the placing rounds. All of them wrestled well, and I’m proud of how they wrestled. They were aggressive and worked the moves that we practiced.”

The Bulldog grapplers will host Tongue River and Shoshoni at 5 p.m. Friday.

Saturday, Lovell will compete at the Greybull Memorial Invitational at 10 a.m.

“Between Friday and Saturday, we will get to see a lot of divisional opponents as well as just a lot of 2A schools,” DeWitt said. “This weekend is always nice to potentially earn head-to-head wins as we get ready for our seeding at Regionals.”