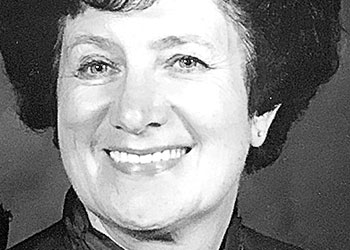 Zelda Brimhall Roberts passed away on Feb. 12, 2020, in Idaho Falls, Idaho. The family expressed that they are certain that paradise is a happier place now that she is there.

Her early years were spent on farms in the Lovell area, including Little Valley Ranch and Copenhagen, where the family lived as she attended her first few years of grade school in Cowley. The family later moved to Hamilton and Corvallis, Mont., and then to Tacoma, Wash., where her parents worked in the aircraft industry to support the war effort. Following the end of World War II, the family returned to Wyoming, living first in Deaver and then on a farm between Frannie and Deaver.

Zelda graduated as valedictorian from Deaver High School, where she participated in pep club, school chorus and school plays. She was a happy and energetic student who loved school and its attendant social life. After graduation, she attended college in Powell for one year, torn between majoring in journalism and law.

While going to school, Zelda worked for Hallie Muller in Frannie, which is where she met the handsome and debonair William C. Roberts, who worked for Muller Trucking and Oilfield Services and eventually won her over. They were married in Frannie in 1950 and later sealed in the Salt Lake Temple of the Church of Jesus Christ of Latter-day Saints.

In addition to raising their three children, over the years Zelda worked in the grocery store and cafe she and Bill owned in Frannie, at the Warren, Mont., quarry, driving tractors for local farmers, at First National Bank in Lovell and at the Wyoming Port of Entry in Frannie, retiring in 1985.

Zelda served faithfully in the Cowley Wards and Lovell Stake as a Seminary teacher, ward and stake Primary leader, in the ward Young Women’s presidency, ward and stake Relief Society presidencies, with her husband as a full-time missionary in the Mississippi Jackson Mission and as a temple ordinance worker.

Blessed with a talent to love and encourage others, Zelda found joy in bringing out the best in those around her. Quick to laugh and generous in giving, her innate kindness blessed all who knew her. With great love, she patiently cared for Bill for more than a decade as he fought Alzheimer’s, taking such good care of him that only those closest to them realized the extent of his illness.

She is survived by her sons Shane C. (Miriam) of Frannie and Lane E. (Wendy) of Idaho Falls; daughter Blynne Roberts (Lynn) Lovell of Gilbert, Ariz.; sister Vivian Fales of Powell; brother Leslie (Arlene) Brimhall of Cody; and brother-in-law Tom Sanderson of Deaver. She leaves behind 18 grandchildren and 46 great-grandchildren.

Funeral services will be held on Saturday, Feb. 22, at 11 a.m. in the Cowley
1st Ward of the Church of Jesus Christ of Latter-day Saints with visitation prior at 10 a.m.