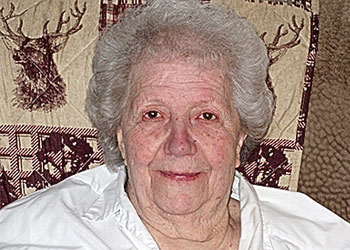 Dorothy L. Brinkerhoff died March 17, 2020. The fifth-born child of LeRoy Lindsay and Geralda Franzoni, Dorothy entered the world on Jan. 3, 1933, in Lovell. She grew up in a house at the foot of the hill where Nevada Avenue, at the time, dead-ended.

Dorothy married Gerald Brinkerhoff after his service in World War II, and the couple temporarily lived in Lovell, where their first two daughters were born. From there they moved to Worland for work and then on to Williston, N.D., and back to Worland. During this time a third daughter was delivered but did not survive, and their first son was born.

From Worland it was back to Lovell, where Gerald worked various jobs before beginning his own construction business. The couple’s final two sons were born in Lovell.

Dorothy worked for the phone company for a short time and later was a shelf stocker at the local IGA. She also worked, side by side, with her sister-in-law, Nadine Lindsay, painting newly constructed homes, built both by Gerald and by Nadine’s son-in-law. Additionally, she worked as a flagger on several different road construction projects, including on the Big Horn Mountains.

During the project on the Big Horns, a crew from Montana went on strike, and the flaggers stepped in for them, erecting a long section of guardrail along the newly created road. For years she would proudly point out this section when traveling past it.

In addition to caring for her family, Dorothy was actively engaged in service in the Church of Jesus Christ of Latter-day Saints. She had callings in the Primary, Young Women’s program, Relief Society and Sunday school, including stints in the presidencies of the various auxiliaries. She also served in the Family History Library and the Billings Temple.

Dorothy battled Alzheimer’s disease the final 12 years of her life and passed away peacefully at home after a series of unrelated ailments.

Due to extenuating circumstances, memorial services will be forthcoming this spring.