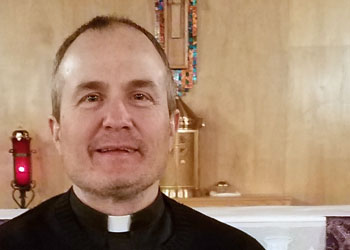 Glen Szczechowski was born in Wyandotte, Mich., 11 miles south of Detroit, to a family of five brothers, two sisters, a grandmother and parents in a 900-square-foot house. Needing a little more elbow room, the family moved to a nearby suburb to a bigger house, but more importantly to a bigger yard.

“Kids used to play outside more than they do now,” Father Glen said, thinking about his childhood. He attended a public school until sixth grade, when he was enrolled in Our Lady of Mt. Carmel Catholic School. During high school he played football, baseball and basketball.

After graduation in 1983 he attended Detroit Engineering Institute, where he became skillful in working with sheet metal. At the age of 19 he took a job in Jackson, Wyo. He enjoyed the outdoors but returned to the Detroit area after 13 months. Still wanting out of the city he took another job in northeast Michigan, where his family had a cabin. Again, he was able to spend time in nature.

Glen had always attended church but wasn’t really involved in a lot of its activities. Charlie Osborne, a lay minister at St. John the Baptist Catholic Church in Alpena, Mich., held a three-day parish mission for people who wanted to deepen their relationship with Christ.

“This was the beginning of a commitment to follow Christ in a deeper way in my life. God’s timing is always right,” he mused.

In the late 60s there was a movement called the Catholic Charismatic Renewal.

“I began attending one of their prayer groups, through which I realized a new walk. I got involved in the leadership team and gave talks at some of the meetings. These were powerful times,” Father Glen shared.

He was asked to chaperone a youth camping trip.

“At the end of that week I stayed another week alone. I remember it was August 15. On my drive home I was listening to a preacher on Christian radio. He was talking about hearing God and following Him. I knew I had a calling and began to make concrete plans for the priesthood.”

Glen put his house on the market and sold it in just two weeks. He left a good job with a company he’d been with for seven years. But to enter a seminary he had to have a sponsor, someone to pay for his tuition at the seminary. The religious community Fathers of Pentecost helped Glen get sponsorship from the Diocese of Alexandria, Louisiana.

“The Diocese of Alexandria, and later, the Diocese of Cheyenne, require one year so the bishop, priests and people could get to know me, as no one knew who I was. The bishops in both dioceses needed to make sure that there would be no problems with me entering the seminary,” Glen explained. Being ordained into the priesthood is quite a process that is not taken lightly and doesn’t happen overnight.

While Glen worked at St. Joseph’s Catholic Church in Marksville, La., in youth ministries, visiting the sick and other areas, he attended classes at LSU-Alexandria getting his basic college courses. After that year he entered Notre Dame Seminary in New Orleans. While there he earned a B.S. in general studies from Our Lady of Holy Cross.

During his third year at Notre Dame, Glen decided that he wanted to become a diocesan priest, as opposed to a religious order priest. He knew he wanted to minister among people.

“A diocesan priest ministers in one diocese, usually for his entire life, and will minister in one or more parishes. A religious order priest can either be cloistered, never leaving his monastery, or apostolic, being out among the people and being engaged in ministries such as teaching, healthcare, helping the poor, giving retreats, etc.,” he clarified.

At this point, he had two years of seminary left.

“Bishop Ricken, who was the bishop in the Diocese of Cheyenne when I was discerning joining this diocese, had me go to St. Mary’s Cathedral for my one-year internship. During my one year at St. Mary’s, I was able to do my clinical pastoral education (CPE) at Cheyenne Regional Medical Center. The seminary requires this. I was also involved with a few ministries at St. Mary’s,” Glen said.

At the age of 38 Glen enrolled in Sacred Heart School of Theology at Hales Corners, Wis., receiving a Master of Divinity. On November 20, 2004, he received diaconate ordination, a transitional position to priesthood. He felt very honored to have his family attend the ceremony.

On May 26, 2005, he was ordained diocesan priest, which was bitter sweet because his father died on May 11. The funeral was held May 16, 10 days before the event he had worked so long and hard to achieve.

Father Glen has ministered two years as associate pastor in Cheyenne, five years at St. Barbara’s in Powell, six years in Rock Springs and a year and half in Lovell.

Shortly after his arrival here, he took a three-month sabbatical to Israel and Palestine for advanced study at the Tantur Ecumenical Institute in Jerusalem and for spiritual renewal. One of the highlights was a night spent at the Church of the Holy Sepulchre from 7 p.m. to 7 a.m. One has to sign up and be approved and is not allowed out of the church during this time.

Of this experience Father Glen said, “Calvary and Jesus’ tomb are separated by a distance of around 100 yards in the Church of the Holy Sepluchre. The church is built over the tomb of Christ and Calvary, all under one roof. Normally the church is wall to wall with people throughout the day, so the overnight experience was very nice. It was very powerful, a quiet experience of meditation and prayer.”

Jews respect the Sabbath. Jerusalem is a very busy, noisy city with lots of traffic. About 4 p.m. on Fridays the streets gradually start getting quiet. Busses stop running. Electronics are not allowed to be used. People disappear. Everything shuts down until Saturday evening when gradually traffic begins to move and all comes to
life again. Father Glen yearns for such reverence, noting, “I wish Christians had half the respect for the Lord’s Day.”

Father Glen has been an avid fisherman all his life, having enjoyed the sport with three of his brothers and his dad. He fishes year round, enjoying ice fishing as well as stream fishing. He takes in sports and looks back on seven years experience in martial arts.

“Being the pastor of both parishes, I try to divide up my time between them,” he said.

Editor’s note: Leaders are found in a variety of positions. One of the positions that might be overlooked is spiritual leaders. For the next several weeks the Lovell Chronicle will feature the spiritual leaders of the area beginning with the priest of St. Joseph’s Catholic Church.