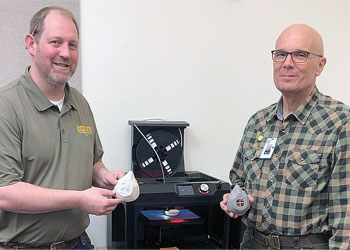 The response to COVID-19 is seeing many entities perform a makeover. Wyoming distillers are to begin making hand sanitizer. Factories nationwide are re-gearing to construct respirators.

Lewis heard of the project out of Billings, with local businesses and hospitals creating designs for sought-after medical masks to be literally printed. Better yet, those designs were available publicly. He reached out to both Lovell and Rocky schools at 4:30 a.m. Monday morning through email.

“Do either of you have, or both, a 3D printer?” Lewis asked administrators in both schools. “We saw over the weekend that we could make masks with a special material and a 3D printer. We are ordering the material this morning and now just need a 3D printer.”

Soon enough, before 9 a.m. that day, the shop teachers from both Rocky Mountain High School and Lovell High School were involved.

“We do have two 3D printers,” Rocky Mountain shop teacher Aric Hanusa replied. “I would be willing to give it a try.”

“I’ll send you the information from Billings Clinic. We would like four or five printed so our leadership staff could look at them and feel them before we have 200 made,” Lewis said.

This is part of the reason 3D printing is such an exciting world to be involved in, Hanusa said. Much of what is designed is shared publically, allowing others to use the design, and even collaborate and improve on it.

“That’s the great thing about these maker spaces,” Hanusa said.

Even better, Rocky Mountain Middle/High School has enough of the special PLA plastic filament on hand to make all 200 of them, given the time to tinker around and print them.

As of Monday afternoon, Hanusa was reworking the design to include a better made stopper, which will prevent the filter inside the mask from falling out.

The masks take three to four hours to print each. It’s not a quick process. But, while standard masks can only be used once, with a new filter and a healthy amount of sterilization, each of these plastic masks can be used multiple times.

That might make them invaluable if the hospital supply chain runs low.

Thrown into the fight to keep local hospitals well-stocked for the likely battle ahead in an instant, Hanusa said he feels privileged.

“It’s kind of neat. A lot of us want to do our part. It gives us an option to do that which is kind of nice. You don’t expect to be able to contribute,” Hanusa said. “We have so many makers in our society, people have different access to different things. We have a lot of people if we band together.”

“It’s worked,” George said, noting that all three of Lovell’s 3D printers are now dedicated to the task.

Better yet, in a time where in-person education is scarce, George has gotten some students involved. Lovell High School students Quinn Lindsay and Jaston Joy have both joined George in helping to print the masks.

“It’s really perfect to apply what we learned in class,” George said. “It’s an awesome project for kids to work on a real world situation.”

It’s an early unexpected project for both the schools and the hospitals, but a little ingenuity and community involvement has every party motivated to do their part.