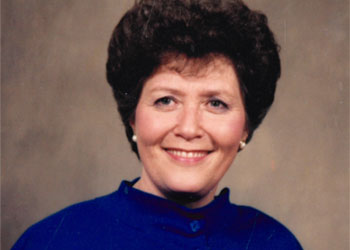 Marilyn was born May 12, 1933, in Lovell, the daughter of Vivin Heber and Reva Robertson Hansen. She was one of five children: Don Wayne, Ralph Budd, Sharon and Gordon Vivin.

She grew up in Lovell and graduated from Lovell High School. After graduation she worked for the AT&T Telephone Company as the business office clerk.

Until the sixth grade she lived on Shoshone Avenue, just across the street from the school, in a neighborhood of many friends. She had many fond memories of playing games, climbing trees, playing ball and having fun with these friends.

4-H was a big part of her life from age 10 through her teens. Her mother and her aunt Alma Hansen guided and helped her with her many 4-H projects, which resulted in her receiving many awards, including trips to Denver, Chicago and Washington, D.C.

When she was 15 years old, she was the national winner in the junior division of the Woolgrowers sewing contest in San Antonia, Texas. She loved to sew.

In the sixth grade her family moved to a home “way” across town on Second Street, next door to the Dover family. Later after Don returned home from the Korean War, they fell in love and were married on Sept. 7, 1952. They were married 63 years.

Together in business in the laundry and dry cleaners and the Sears store, she always supported Don in his many civic and church activities and commitments. She often felt she was one of the firemen as she rushed to the business as Don left for a fire.

Marilyn sang with a group of dear friends in “Rainbow” for many years. Marilyn and Don loved to travel and with their special friends and family cruised and traveled together to many interesting places. They enjoyed a closeness for many years.

Marilyn was an active member of the Church of Jesus Christ of Latter-day Saints, serving in many capacities, including serving several years in the Billings Montana Temple. She was a homemaker, devoted wife and mother of three sons, Gregg, Bret and Gary, grandmother of 10 grandchildren and great-grandmother of 25 great-grandchildren.

She was preceded in death by her husband, Don, sons Gregg and Gary, daughter-in-law Patti, brothers Don and Budd and grandson Bodie.

No public services are scheduled to be held at this time. Condolences may be sent to the family online at wilksfuneralhome.com.