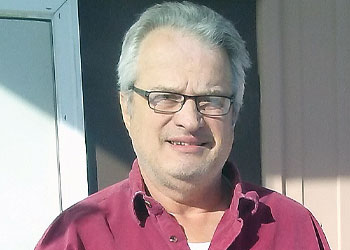 Dan Jarvis was born a midwesterner in New Castle, Ind. At a young age his family moved to Mooreland, a small farm town 10 miles away, where he was raised. He was big brother to a sister three years younger and eventually to another sister, who was 13 years younger.

His upbringing was hard. Being the oldest and the only son put him in the position of carrying a heavy load of responsibilities. Although he had some friends, he became somewhat of a loner. He spent a lot of time hunting and fishing to meet the needs for the family.

His religious exposure as a child was with the Quakers. His mother would take the children to church whenever she could.

Mooreland didn’t have a football team, but Dan lettered in basketball and excelled in track. He also sang in a small group in high school, which he enjoyed a lot, he said.

During high school Dan had a dream that involved a red vehicle and a blue vehicle. That summer he worked for a veterinarian. They were going out on a call when they had an accident.

“There was blood everywhere. My blood. Gas was pouring out,” Dan recalled.

Dan got his coworker out of the vehicle, fearing a fire could start. He grabbed the veterinarian bag because of the drugs in it and gave it to the officer who had arrived. And then he passed out. When he woke up, he was in the emergency room.

Dan’s left ear and hands were cut badly, and he had a skull fracture across the back of his head from ear to ear. As a result of the head injuries, he has suffered tremendous headaches.

He was dating Elaine Herndon. A week after the accident Dan’s dad was going to town. He told Dan he’d drop him off at Elaine’s for awhile. She started playing 45s.

“You’ll probably have to explain what that is,” he said, smiling, during this interview. “It’s not a gun. They’re little round discs that were put on a phonograph that went round and round and made music.”

The first song Elaine played was “Put Your Hand in the Hand (of the man from Galilee).”

“I couldn’t believe it. That was the song playing on the radio when we had the crash. We hit a blue car, and we were in a red pickup truck. Three months later, I was saved. That began my life of following God,” Dan explained.

After graduating from high school in 1971, he enlisted in the National Guard, taking basic and advanced training at Fort Polk, La.

“That was a horrible place. It was a swamp infested with bugs and snakes and mosquitoes you could hear outside your tent,” Dan remembered.

He returned from Fort Polk in 1972 and married Elaine.

A highlight during his youth was the Washington For Jesus Rally that he attended in 1980.

“It was beyond description,” he said. “I was working in Lafayette, Ind., on grant proposals for a new youth center. The church paid for Elaine to go, and some very special ladies paid for me. The police said that there was a total of more than 300,000 people, representing every state as well as many other countries. At times a person could have walked from one side of the National Mall to the other without touching the ground if you could walk on top of people. The whole thing was overwhelming and wonderful. Everyone there was in the same mindset, to lift up the Lord.”

The last thing Dan wanted to do was become a preacher, he said. “Elaine and her mom were praying for me. Their prayers were answered,” Dan admitted.

Dan began a 33-course study from the Berean Correspondence School of the Assemblies of God Church to prepare for the ministry. After finishing the Berean studies, he enrolled at Lee University, a Church of God school in Cleveland, Tenn., and graduated in June of 1988. He received a B.S. in Christian education with a minor in Bible and special pastoral services, which included training in crisis counseling. He has been able to use this training in his ministerial work, counseling people who are suicidal or have lost a family member in an accident.

He was ordained in 1990 by the Assemblies of God.

There were two men that had great influence on Pastor Jarvis. One of those men was his pastor Rev. Lange. Shortly after Dan started going to the Assembly of God Church in Ooltewah, Tenn., he hesitantly asked Rev. Lange if he could help him in any way. Tears filled the pastor’s eyes as he told Dan that he had been praying for another minister to come and help. Not long afterward, Rev. Lange had a stroke and was unable to speak. He wrote a note asking for Dan. He wanted Dan to take over the ministry in his stead.

Dan preached for a year and a half before the pastor recovered enough to resume some of the responsibilities. The church saw much growth to the point that they had to build on to the church. Rev. Lange was a great mentor, and they worked together well because of the love and respect they had for each other, Elaine said.

Another man that impacted Dan was Rev. Gwen Green. Elaine described him as a “going, going kind of guy.” He was a big promoter of visitation. He brought Dan along in the same path.

Rev. Green had a radio broadcast in Cleveland, Tenn. He invited Pastor Jarvis to do some of the broadcasts.

“Have you ever sat in a room by yourself and preached? I recorded for 6 1/2 hours continuously. That’s so hard to preach to no one. You never know if anyone is receiving what you’re preaching,” Pastor Jarvis shared about his experience. “Later, I was at a ministry crusade in Atlanta and happened to talk to a man from Monticello, Ky., who said his grandmother listened to the radio broadcasts and loved my sermons and thought my preaching was right on.”

When asked to tell some highlights of his ministry Pastor Jarvis replied jokingly, “Does a hailstorm count?”

He served as youth pastor and associate pastor in churches in Indiana and Tennessee. Besides a temporary eight-month appointment to a church in Montana, Pastor Jarvis has pastored the Lovell Assembly of God Church from 1991 to 1993 and again from 2000 to the present.

He responded to the question of retirement by answering with a grin, “I don’t see that anywhere in scripture.”

Describing what Elaine felt the greatest thing her husband has achieved, she shared, “He gave his heart to the Lord, but coming from his Quaker background, he wasn’t going to be filled with the Spirit or be baptized in water. A man where he worked started a Bible study. While Dan was attending the study he was filled with the Holy Spirit and wanted to be baptized. To see him go from what he was to the Christian he is has been wonderful.”

Pastor Jarvis was asked what his hobbies are, to which he replied, “Now, growing older.” He used to hunt, he said, but he’s not able to do it anymore. He also misses bass fishing in the south. However, he does enjoy bowling now.

Rev. Dan Jarvis and Elaine have two grown daughters, Jennifier, who teaches in Georgia and has two girls of her own, and Jessica, who is married to Lovell native Ryan Martens, son of Bob and Elsie Martens. They live in South Carolina.