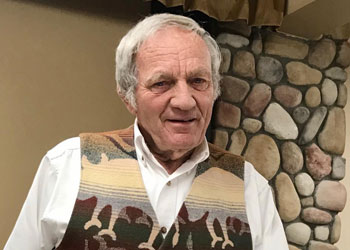 Kurt McNabb was born in Croswell, Mich., but his family moved up the road about 19 miles to Yale, Mich., when he was 2 years old. He still likes to tease people, telling them that he graduated from Yale.

He grew up on a farm close to neighbors that made a lasting impression on Kurt.

“Growing up on a farm next to two families with foster children embedded within me a love for families without. These families made a profit raising kids. It broke my heart,” he said.

The Peace Corps was just being organized when Kurt was nearing graduation. During his final weeks, just to spend time with friends instead of being in class, he filled out pages and pages of an application to the Peace Corps, never intending to submit it. However, when it was completed the teacher picked up the applications and mailed them. So, Kurt got the only telegram he ever received. He was accepted and was on his way to Puerto Rico.

Since the Corps was a new organization, they were very strict concerning their policies. One policy they were quite clear about was that they were not a spiritual entity.

“I thought that if we were going to underdeveloped countries to show people a better way to live and didn’t show them faith, we weren’t giving them much to hold on to,” he said. “I had no impression that I was headed toward ministry until they said, ‘If you want a mission, better find something else.’ That statement, combined with the feelings I had for the neighbor kids, caused me to realize I was headed toward youth ministry,” Kurt said.

He spent less than a year in the Peace Corps. He left there and enrolled in Bob Jones University at Greenville, S.C., because he had heard a singing group from the school, and he wanted to sing. He majored in public speaking and minored in Bible.

While he was at Bob Jones, he was doodling on paper when he realized he had drawn a boys home. Kurt was one semester short of graduation when his number came up for the draft in 1967. But, he didn’t go into the service.

A school principal called and asked him to substitute for a fourth grade class. The superintendent petitioned the draft board to allow Kurt to stay with the school. He taught fourth grade for the next three years. Kurt agreed to stay because of a fourth grade teacher, his only male teacher, that left a huge positive impression on him. He wanted to do the same for these kids. He was the only male teacher, so he was assigned the problem kids.

“These kids did well in school with me, but then they would go home to a poor environment,” he said. He longed for a place for kids to be safe and secure and cared for.

Meanwhile, future wife Lavonne was a senior in high school. On her way to school every day she passed a neat house with a pond. She thought to herself that it would be a nice place to raise kids. In the senior year book under plans, Lavonne wrote that she wanted a place to raise kids. She hadn’t even met Kurt yet.

Kurt embarked into the ministry as a full-time youth minister at a Nazarene church in Port Huron, Mich., where he met Lavonne. They were married Dec. 29, 1972. They knew from day one that they were going to raise kids from problem homes.

Kurt was filming documentaries. He planned to come to Montana to film wild horses while looking for a place for a boys home. Coming from Michigan, they took a wrong turn at Sheridan and ended up in Lovell. The gas attendant at Goldie Johnson’s station, Lynn Beddes, told Kurt about the wild horse range and that he was in horse country. He never went any farther. That date was Jan. 6, 1973. Kurt built a two-story log home north of town and started Fort Shiloh Boys Home.

Kurt got involved preaching in a circuit of 25 churches all over the state. He preached at each church twice a year. He was a modern-day circuit riding preacher for 20 years.

A woman from Jackson had a nephew in California who was in a lot of trouble and was either going to jail or had to leave the state. She asked Kurt if he would take the boy, who was already 18. He stayed at Fort Shiloh for a year. Lavonne’s dad was an evangelist who found their second boy, Dave Phelps. Over the years they have raised close to 600 boys ages 12 to 16 typically, with as many as 20 boys in their home at one time.

Initially, Kurt was licensed with the state, but as the regulations got more and more confining, they were allowed fewer and fewer children and less religious freedom. When they could take only four kids at a time, they stopped taking state kids and dropped their state license.

Not only did they raise other people’s children, but they have four of their own, Jeannie, Darold, Ken and Clancy.

When the government expanded the boundary of the wild horse range, it included the land that the McNabbs owned, so they were forced out. As God would have it, a woman was selling property at Clark with the stipulation that a portion of it had to be donated to someone with a boys home. They moved to Clark in 1981.

The Bible Church was without a pastor and needed some guidance. They invited Pastor Kurt, who was still pastoring in Clark since 1992, to help. That was 12 years ago. He has been a spiritual leader for both churches since 2008.

Kurt McNabb is a worker. Second to talking to people about God, building is his favorite pasttime.

“I hunted some to take the boys, but I don’t need to do it for myself,” he said. “I’d rather have a building project.” And build he does. He is a master woodworker.

After talking to the owner of the old Haskell warehouse, he called the Bible Church people to meet him at the building.

“You can tell me I’m crazy and that’s OK. I want us to buy this and make it our church. I believe God is wanting us to step out in faith. He is going to grow this congregation, and we need to get ready,” he expressed enthusiastically

Although it seemed outrageous, in reality the people could sense his vision and moved forward with him. He transformed the old warehouse into a unique sanctuary with a western/outdoors theme of log and wood decor. As soon as he gets one project completed he looks for something else to remodel or build. From there he responded to God’s leading in creating the youth house ministry and the welding school.

While Pastor Kurt was transforming the warehouse building on Main Street into a church, Sheriff Ken Blackburn stopped and asked him to consider being chaplin for the county jail in Basin. Although it was not something he would have sought out to do, he has developed a heart for the men at the jail.

He has a great concern for the men when they are released. Often they have no training or skill to be work ready, so they go back to their old habits because they have nothing else to do. He dreamed of providing them with a skill that they could use to make a future for themselves. That dream became Shiloh Technical Institute. He purchased buildings and equipment and now operates the welding school on Main Street in Lovell. It is in its second year.

Lavonne McNabb shared, “Kurt’s main focus is being involved with people and watching God work in their lives.”

His response was, “Starting from the foster kids I will always gravitate to the down and out. I am most concerned for the spirital growth of the common man.”

Pastor Kurt McNabb is a visionary. He sees things for what they can become, which is a good character trait for a minister because he sees it in people, as well as in things.