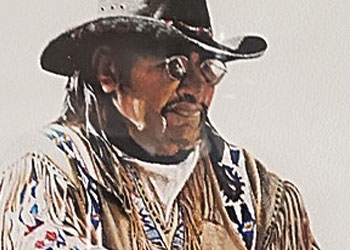 Victor Martin McDarment joined his ancestors on April 12, 2020, after a very long battle with disease. He fought long and hard to stay as long as he could. Victor was born Sept. 25, 1948, in Porterville, California. He was an elder with the Yokut Tribe of American Indians, Tule Indian Reservation.

Vic was a Vietnam veteran with many honors. The most prestigious was the Silver Star awarded for taking out an enemy battalion and carrying out an injured soldier, saving his life. Even though he rarely spoke about the war, he always carried pride, respect and tragedy of his time in the service. He loved our flag and all military members.

For 30 years, he worked for the BLM as head cowboy for the Wild Horse Program, gathering over a million wild horses and burros. The first wild horse that he caught was at the age of 13.

After spending many years in Rock Springs, he and his wife, Beverly, of 22 years, moved to Lovell as their retirement destination. After many years of gatherings, hunting and fishing in this area, he had learned to love the area and the people here.

Joining him in the spirit world is his mother, Velma Juanita McDarment, and sister Janice Wheeler as well as many family members and friends meeting him with a horse to carry him on his way. Ride swift.

Cremation has taken place and a celebration of his life will be held in the future. His wishes were to be scattered on the Wild Horse Range in Rock Springs with all of his cowboy friends and family. In lieu of flowers, donations can be made to the St. Joseph’s Indian School in South Dakota.