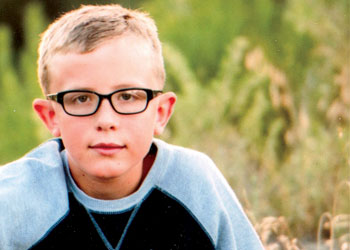 Letters About Literature is a state level reading/writing promotion program for students from fourth to 12th grade. The students are asked to read a book, poem or speech and write to the author about how the writing affected them personally.

The students from around the state compete in three different age categories, which are level one ranging from fourth to sixth grade; level two, seventh and eighth grade; and level three, from ninth to 12th grade.

Asay wrote a letter to Daniel Handler, the author of the book series, “A Series of Unfortunate Events,” explaining how much he liked the books and how much joy and entertainment they bring to his life.

When discussing why he wrote to Handler about the book series, Asay spoke of the impact the books had on his life.

“Your books bring me joy because of how much they changed me,” Asay said in the letter. “I sometimes feel like I’m the most unlucky person on this planet, but when I read how bad others’ lives can be, like the Baudelaires (the main characters in the books), I see how lucky I am in comparison.”

Later in the letter, Asay explained, “I could’ve been framed for murder like at ‘The Vile Village,’ but I’m that lucky. And, when I’m mad at my parents, I can be grateful that they are still alive and not on fire.”

By winning the seventh- and eighth-grade division of the contest, Asay won a $150 Amazon gift card.