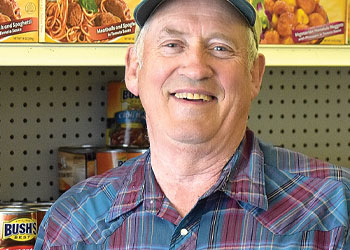 For those looking to get a meal for half the price, Lovell’s Discount Grocer is opening soon.

The brainchild of Gene Zeller, the Discount Grocer will be opening in the former storage space of Queen Bee Gardens and will be located just next to the candy store on Main Street. Within it, an assortment of boxed, canned and dried goods will be available for substantially discounted rates.

“It’s a lot of what you’d find anywhere else,” son Jason Zeller said, “just for a lot cheaper.”

Items will at least be half the price of standard retail price, while some items will be discounted at even steeper rates.

The current opening date for the store is Monday, May 11, but that is subject to change.

The secret, Gene Zeller said, is that the store brings in items that won’t be taken by other stores. In a lot of cases, the products are weeks past their best buy date. That’s a whole different date than the government required expiration date, according to Gene Zeller.

“The best buy date is simply a gimmick used by manufacturers to get people to throw out the food they have and buy it again,” he said.

In other cases, if one can gets a dent in it, stores won’t accept the whole box, due to presentation reasons.

“So, yes, we do have dented cans here,” Gene Zeller said.

Gene Zeller said the store is being opened as a thank you to the community for supporting his family for the past several decades.

“I’m not in it to make money,” he said.  “If it wasn’t for this community, I don’t know if we’d be up and running. They pitched in and helped clean things for us. They helped donate things for us. I can’t work here without seeing a honey tank or a freezer and know it came from so and so. This is just a way to say ‘hey, we really appreciate it.’”

The store wasn’t created as a direct response to the COVID-19 crisis. Gene Zeller has been working on the idea since December, but the family admits its opening certainly comes at a good time.

“(Gene) is in it to help. It’s something the community could use,” Jason Zeller said. “I’ll tell you what, with as much as my paycheck has dropped, I’ll be shopping there.”

Pallets of boxes can still be seen lining the store waiting to be unpacked. It’s largely a mystery what’s in them,  Gene Zeller said. One box opened Tuesday carried entirely peanuts and coconut water. It’s also a mystery how the store will be organized, since products being shipped in are unknown at any time.

What is for certain is that every week, shoppers will be able to go there for a meal that isn’t so hard on the wallet.

“If you see something you like, I suggest you buy it,” Gene Zeller said. “There’s no guarantee we’ll ever have it again.”