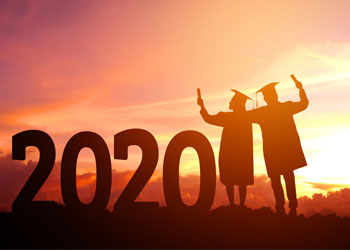 The details of Lovell and Rocky Mountain High School’s graduation ceremonies have been finalized.

Giving graduating seniors a proper send-off took some ingenuity from the school districts this year after COVID-19 and social distancing concerns made traditional ceremony impossible. Both schools had the extra hurdle of getting their plan approved by the Big Horn County Health Department as they looked for ways to celebrate without gathering individuals in close proximity to each other.

“It’s not the traditional graduation plan we were hoping for,” Rocky Mountain Principal Tim Winland said in an email to parents and staff. “We are still thankful for the opportunity for parents and graduates to participate and be recognized in a celebratory manner.”

At 6:45 p.m. graduates and their immediate family are asked to begin lining up for a parade on the west side of the high school. At 7 p.m., the parade will begin. The parade will journey up Highway 310 before turning down Cowley’s Main Street and then making its way back to the high school, ending at the school parking lot.

Community members are asked to watch the parade from their cars or lawns and adhere to current social distancing guidelines.

Each Rocky graduate will receive two parking tickets for when they return to the high school, one for themselves and one for extended family to park in the front row of the parking lot.

At 7:20 p.m, the awarding of diplomas will begin. One at a time, each graduate will be called forward to be awarded his or her diploma. Graduates will get out of their car walk up to the stage, picking up their diploma from a table.

Graduates will have the opportunity to be photographed with their parents once off the stage at a separate location, and then they will be asked to return to their car with their family.

Once the final diploma has been awarded, graduates will step out of their cars and be directed to turn their tassels by the senior class secretary.

Graduates and their families are invited to attend a private showing of the movie “Call of the Wild” in Powell at the American Dream Drive-in Theatre after the graduation. The movie begins at 9:30 p.m.

Lovell High School will hold a similar graduation ceremony the day before Rocky Mountain on May 18, also featuring a drive-in ceremony.

Lovell’s ceremony will begin at 7 p.m. with a virtual tribute to the class of 2020, which will include a salute to retiring staff members. Students and their families are encouraged to watch the tribute at home.

At 7:45, graduates and their families will arrive at the high school and line up in the bus lane from the entrance on Hampshire Avenue. The ceremony will begin at 8 with graduates forming a single-file line in their vehicles to receive scholarship certificates, plaques and finally their diploma in a drive-through procession. Diplomas will be passed out by members of the Big Horn County School District No. 2 Board of Trustees.

The presentation will be broadcast to the community through an FM radio channel. The station has yet to be announced by the district.

After the passing out of the diplomas, the graduates will have a class toast and wave their hats out their car windows in a modified version of the traditional cap toss before taking part in a culminating community parade.

The graduates will be escorted down Lovell’s Main Street to be recognized by community members, who are encouraged to park their cars along Main Street.

Following the parade, the escort will lead graduates’ vehicles back to the parking lots of the high school and gymnasium, where a fireworks display to honor the class will be held.

The district hopes the ceremony will be one of two held for the class. In a special meeting held by the board in April, the board voted to also begin planning for a traditional graduation ceremony later in the summer, if social distancing restrictions are lifted.

“We don’t want seniors to leave and not have anything,” board president Bruce Jolley said in that meeting. “So, we’re going to give you our best to give you a good graduation, and you know what, maybe we’ll give you two really good ones.”